A Year of Inconvenience
For one year, I'm making everything from scratch and forgoing convenience foods. Join me on my journey! By Pam Mehnert on March 1, 2011 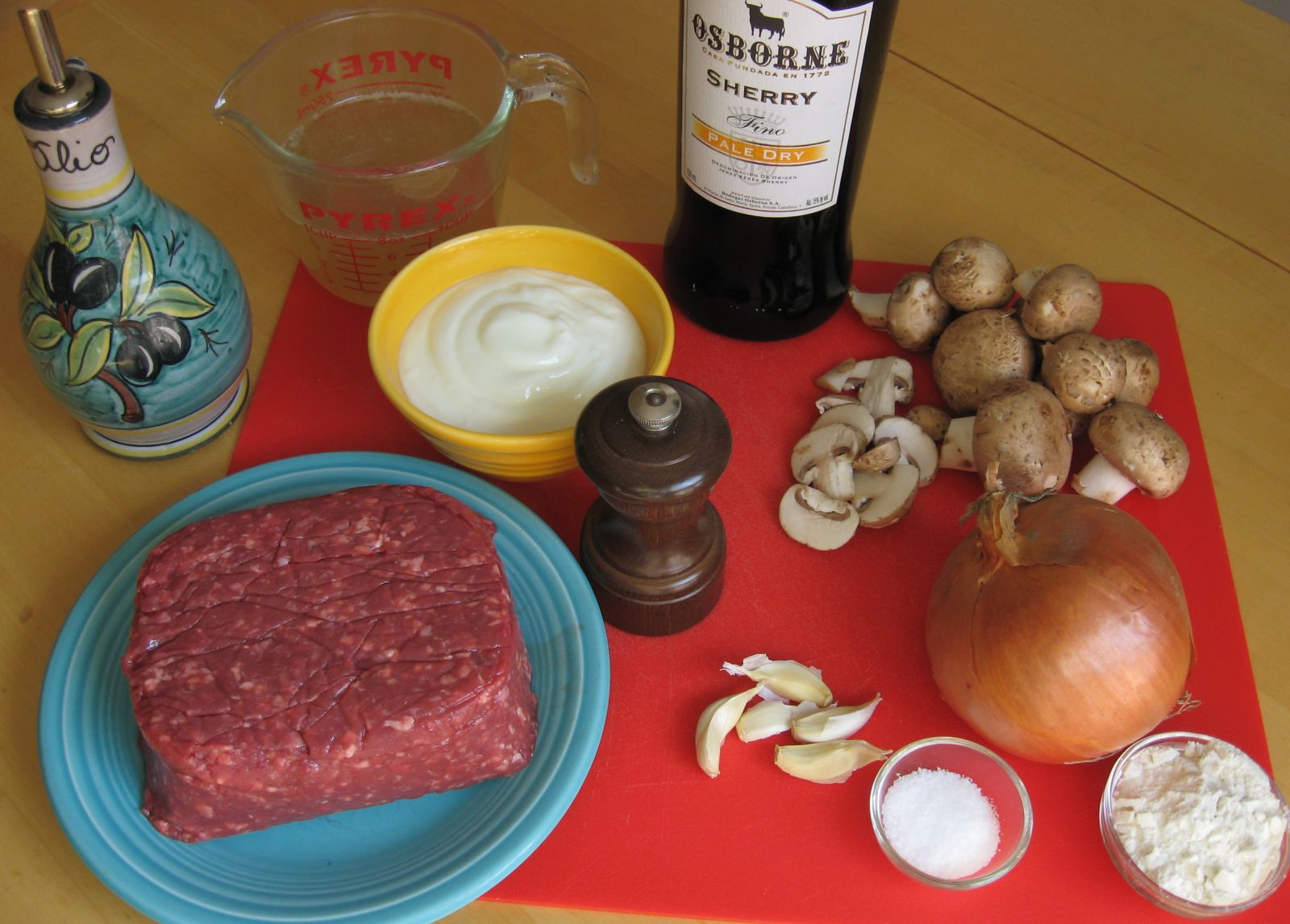 Looking for an easy meal to make? Time to reach for your Hamburger Helper. Wrong answer - that’s a convenience food, and quite honestly I have never in my entire adult life used that product. So what’s a girl to do?

When you’re cooking everything from scratch the only “easy” meal to make when you get home late from work usually consists of a protein, vegetable and starch. I’ve been getting pretty tired of that kind of “easy” meal now 45 weeks into my challenge, as well as reverting to the same old frozen leftovers. So this week I was determined to look my arch nemesis straight in the… uhm… I was determined to overcome my fear of failure for the third time, making pasta from scratch. I decided on an easier topping for my pasta, one that could be made in about 20-30 minutes or so from start to finish. I don’t think I’ve had beef stroganoff for a couple of years now, ever since I began working on shedding a few pounds, so I wanted to make something that was lower in fat and calories.

Bison, for those of you really afraid of the notion of using this meat, is very, very, need I say VERY similar to ground beef. The flavor is almost indistinguishable so get over that fear right now. The American Heart Association (and Outpost’s nutritionist Judy Mayer) recommends bison as a healthy alternative to beef, as it’s lower in fat and cholesterol. A three-ounce serving of bison is only 143 calories, compared with ground beef at 211, and has only 2.42 grams of fat, compared to 9.3 grams in ground beef. There, have I convinced you yet?

The other product I substituted in the original recipe (from Cooking Light) was non-fat strained yogurt in place of the sour cream. Straining it through cheesecloth for about 45 minutes (or overnight if you plan this meal ahead) gives you the thick consistency of sour cream without the calories (120 calories in a cup of nonfat yogurt compared to 280 calories in a cup of low-fat sour cream).

Now if you’re committed to make everything from scratch in this recipe, you’ll need to have some beef broth made ahead of time (frozen) and you really need to mix your pasta dough first before you do anything else. I finally found a dough recipe that works (thank you Gourmet) and the key I believe is to let the dough rest after kneading – which this recipe calls for resting for one hour. So that doesn’t make this a really quick meal now does it? Well it does if you make the pasta ahead of time since you can refrigerate it fresh for a few days or freeze it for later. Or if you’re like me, you plan on 1 ½ hours total, starting with the pasta dough, and while it’s resting you make the stroganoff. I let my dough rest for 45 minutes and it worked just fine. 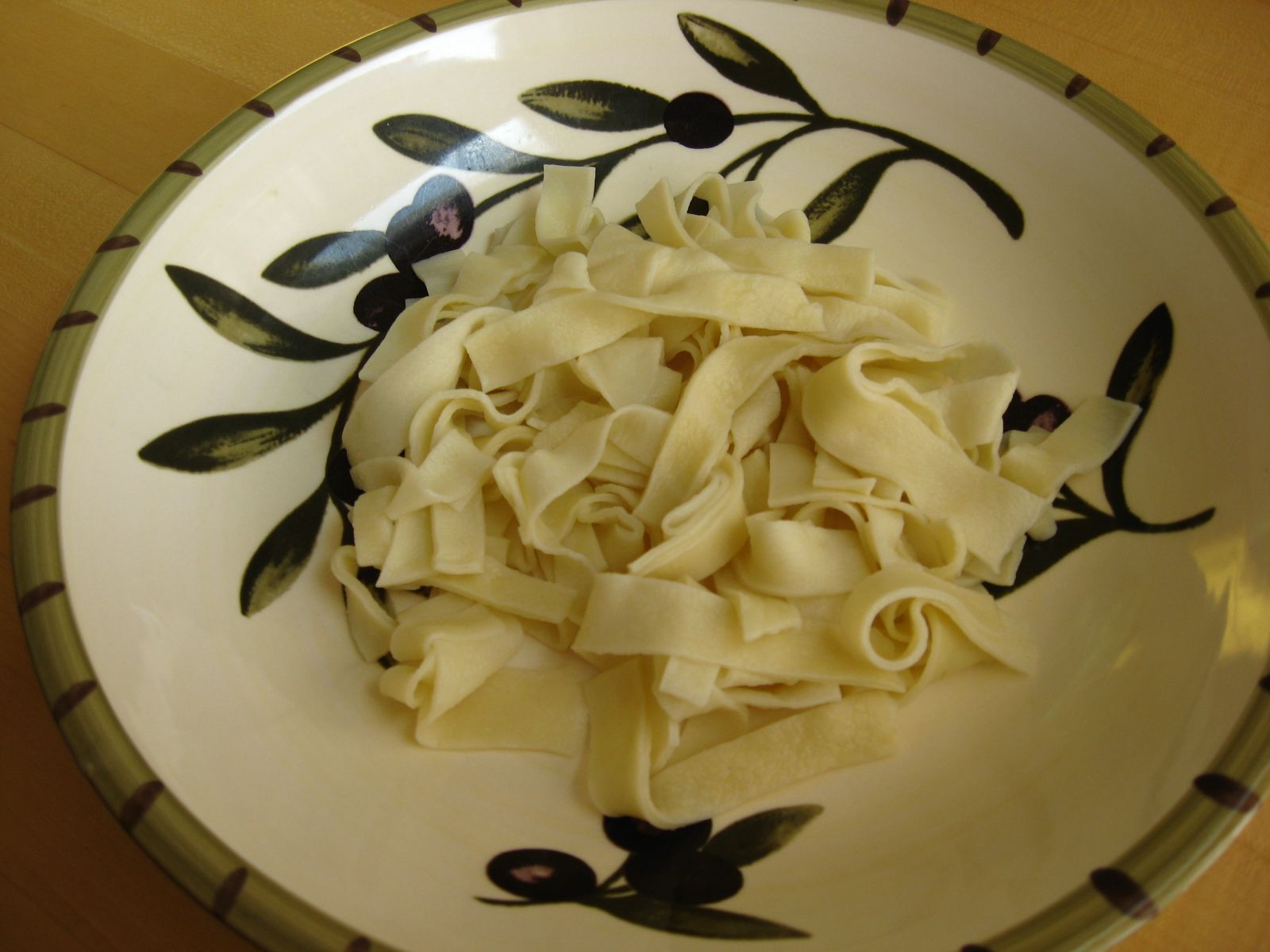 Look at me, all proud of my pasta. This from the girl who has been resenting it since the last failed batch a few meals ago. In fact just this past week I made a “pasta salad” from some frozen rigatoni I had made a month or so ago using my pasta play dough maker. The pasta was rather gummy so the salad did not look at all appetizing, so I was embarrassed to eat it in front of my co-workers at the lunch table. How I got the courage to try again, I don’t know. But I’m really glad I did try again. In fact I was so proud of myself I had to take a small bowl of cooked pasta into work to show my co-workers that I wasn’t as lame as I looked last week eating my sad, sad pasta salad.

Okay, now it’s time for you to try. This is really delicious, so get out there and make yourself a truly rewarding dinner. Believe me, you’ll impress the heck out of your dinner companion (do make sure you have one for this meal as they will think you are a culinary celebrity).

Do not even think you can deviate from this recipe. The eggs give it the silky noodle texture you need. 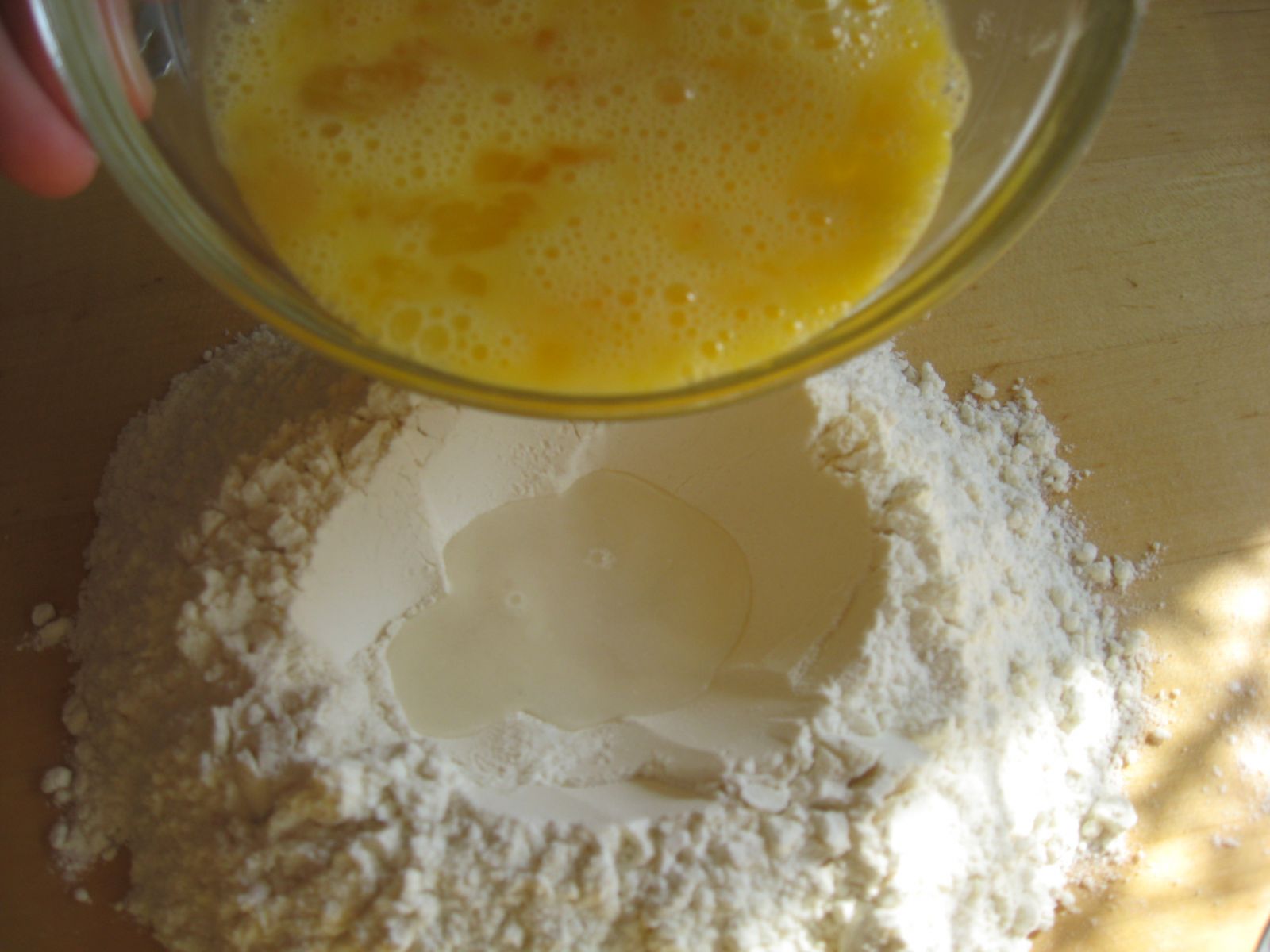 Place the flour on the surface of your table, preferably a wooden surface. Make a well in the center of the flour.

In the center of the well, add the salt and the eggs along with 1 tablespoon of the water. If you’re lucky, the eggs won’t break the wall of the well and start running towards the edge of the table like mine did. You’re lucky? Great, now gradually stir in enough flour into the eggs to begin to form a paste, pulling in flour closest to the egg mixture and being ever so careful not to make an opening in the outer wall of the well. 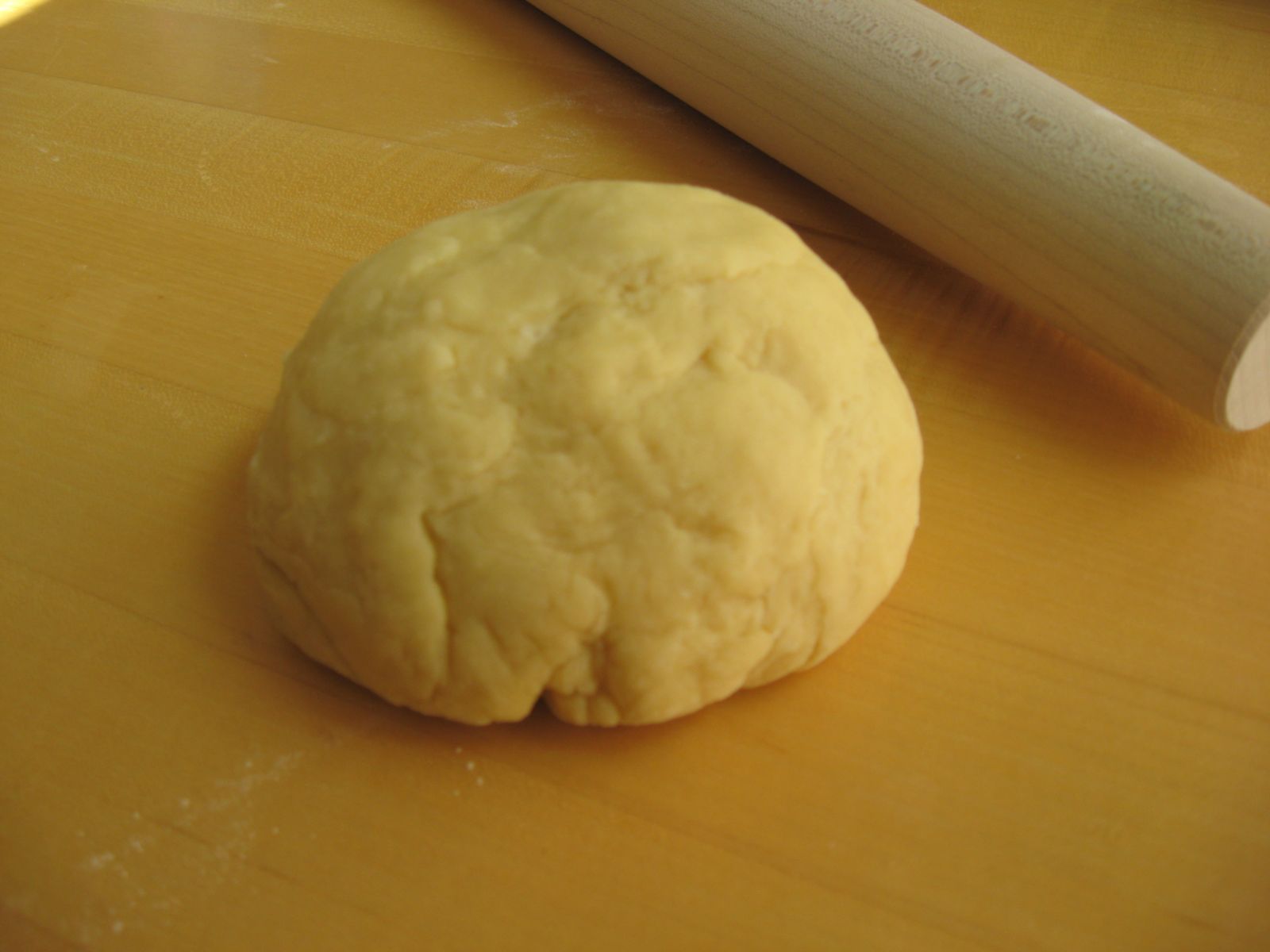 Knead the remaining flour into the mixture with your hands until it forms a ball, adding a few more drops of the remaining tablespoon of water at a time, until the dough softens. The dough should be firm but not sticky.

Knead the dough until it is smooth and elastic, about 8 to 10 minutes. Cover it with an inverted bowl and let it stand for about one hour. This is an important step because it will allow the dough to relax and be easier to work with.

Divide the dough into 4 pieces, and keep whatever dough you are not rolling out covered by the bowl. Roll the dough with a wooden rolling pin, or through a pasta roller until very thin. The dough will tend to stretch and then spring back a little, so I held onto one end of the dough with the palm of my hand while using the rolling pin to stretch it. Flip the dough over as you roll. I didn’t need any flour during this process but if your dough is a little sticky you will need a small amount of flour. Use as little flour on the counter as possible. 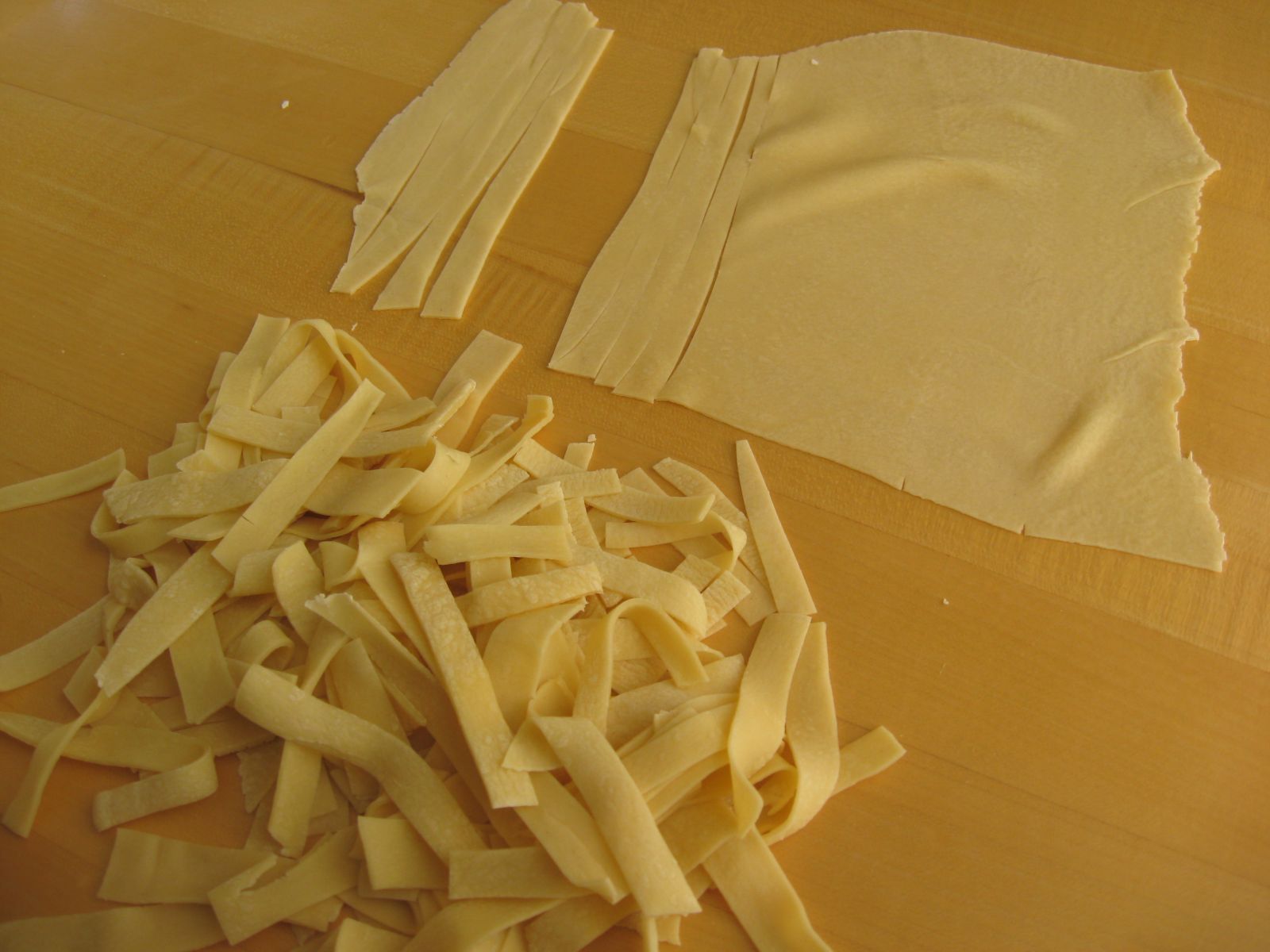 Cut thin egg noodle size strips and set them to the side while you finish rolling out all of your dough. Cook in boiling water for about 5 minutes. They cook very quickly so keep your eye on them.

Bison Stroganoff (My Hamburger Help Her) 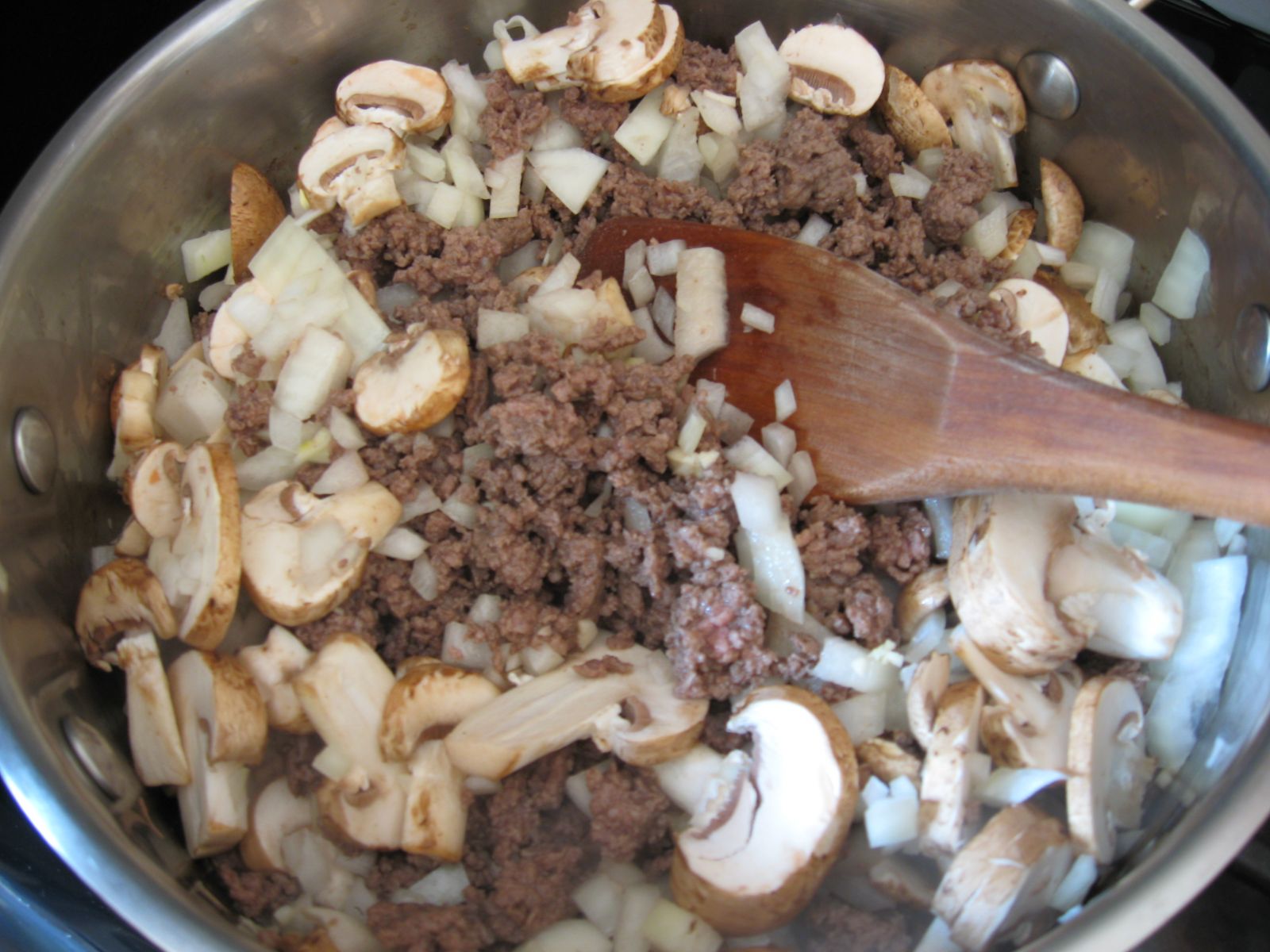 Heat the oil in a large skillet over medium heat and add the bison or ground beef, breaking up the meat into smaller pieces while it browns. When the meat is brown, add the onions, garlic, and mushrooms and continue to cook for about 4 minutes, until most of the liquid evaporates. Stir this mixture frequently. Add the salt.

Next, sprinkle the flour over the meat and cook for about one minute, stirring constantly. Your mixture should thicken up nicely with the flour.

Stir in the beef broth and sherry and bring the mixture to a boil. Once it boils, reduce the heat and let it simmer for a few more minutes. The broth will thicken up nicely at this point. Add pepper to taste.

Remove from the heat and stir in the yogurt or sour cream until combined.

Serve over homemade pasta, which you are incredible pleased that you made yourself and it turned out so perfectly! 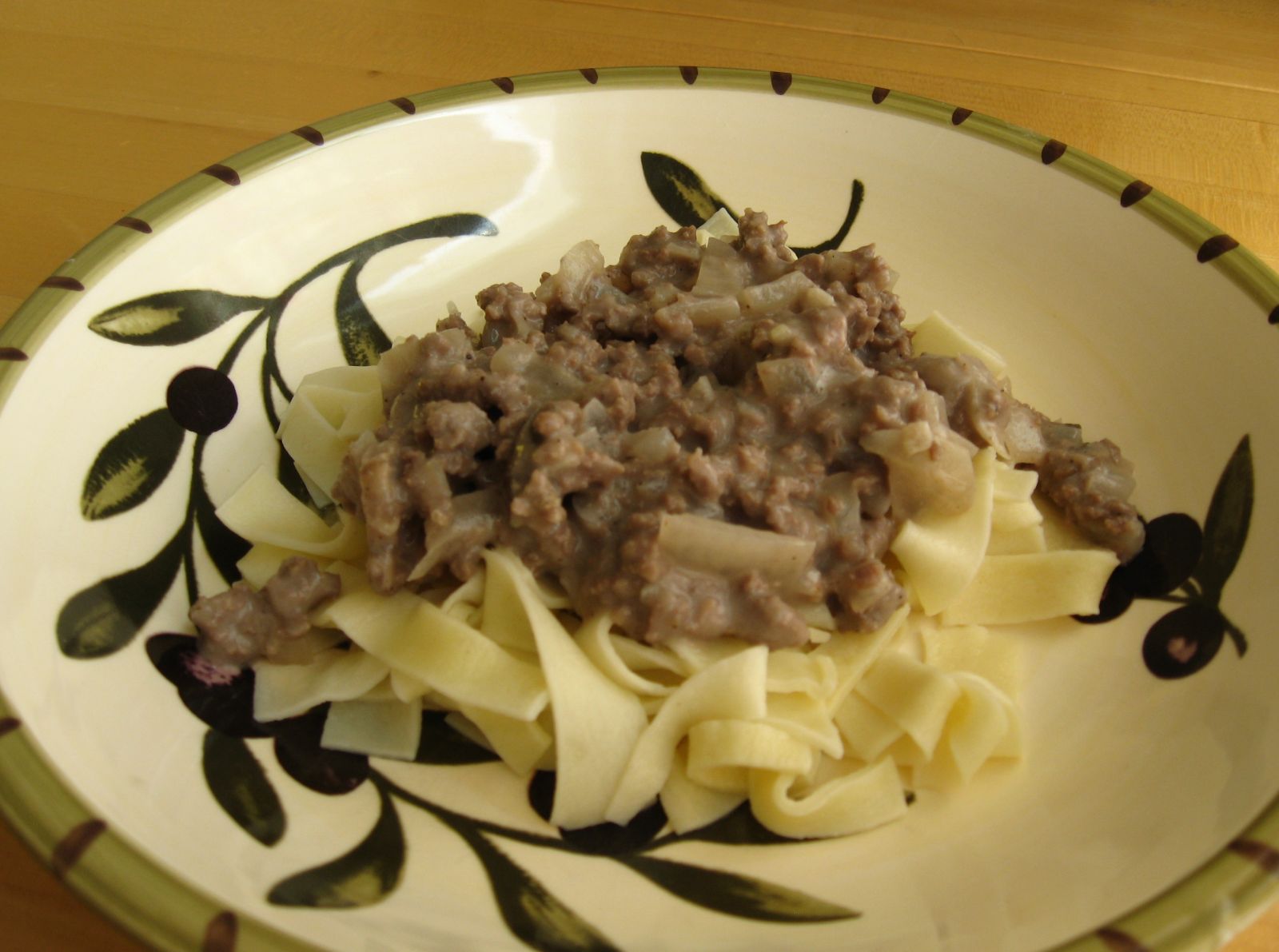 Enjoy with your stroganoff because you made everything from scratch!