A Year of Inconvenience
For one year, I'm making everything from scratch and forgoing convenience foods. Join me on my journey! By Pam Mehnert on February 22, 2011

My year of inconvenience is slowly but steadily coming to an end. I mention slowly because this past week was particularly slow going. Work was packed with more meetings than usual, and my free time was spent either shoveling snow or working on a painting/remodel project at home. So meals this week were rather haphazard at best. Fortunately I had my reserve of frozen meals to get us through most of the week. Here’s a sample of what I’m talking about.

Me – “I dunno, how about this container marked ‘chicken verde’ does that sound good?”

Lisa – “Sure I’d love to have Mexican food tonight.”

Me – “uhm… this looks like chicken in here but I don’t see any ‘verde’ to speak of. I think it is Indian flavored chicken something that we made awhile ago.”

And so it went. We didn’t starve nor did we eat particularly well. I’d say I actually had two high points in the week, which to me are kind of like the yin and yang of food cravings. 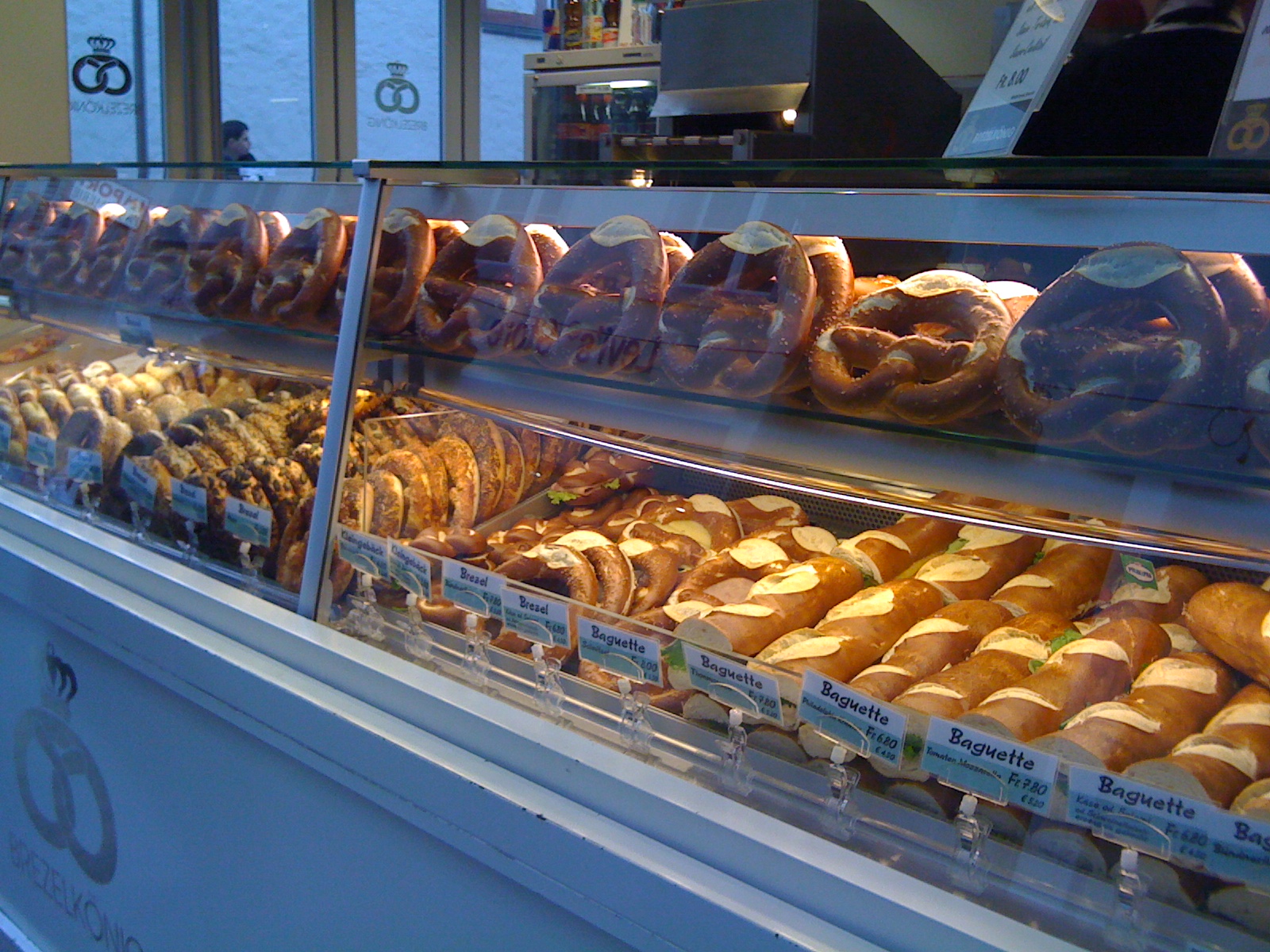 The Yin: Sitting in meetings all week in our office conference room, I happened to chose the side of the table directly across from a group of photos we had up to assist with ideas for a store remodel. One picture in particular, demonstrating “unique and abundant” was a display case of large, beautifully crafted pretzels from my trip to Switzerland in 2009. Wow, did I crave pretzels all week long! So, high point number one which met my salty food craving, was to visit the Old German Beer Hall after work on Friday with friends…where they have delicious Hofbrau beer AND delicious GIANT soft pretzels. While I know I can make these myself and in fact making pretzels is great fun, I admit it was even more fun to have someone else make it for me. 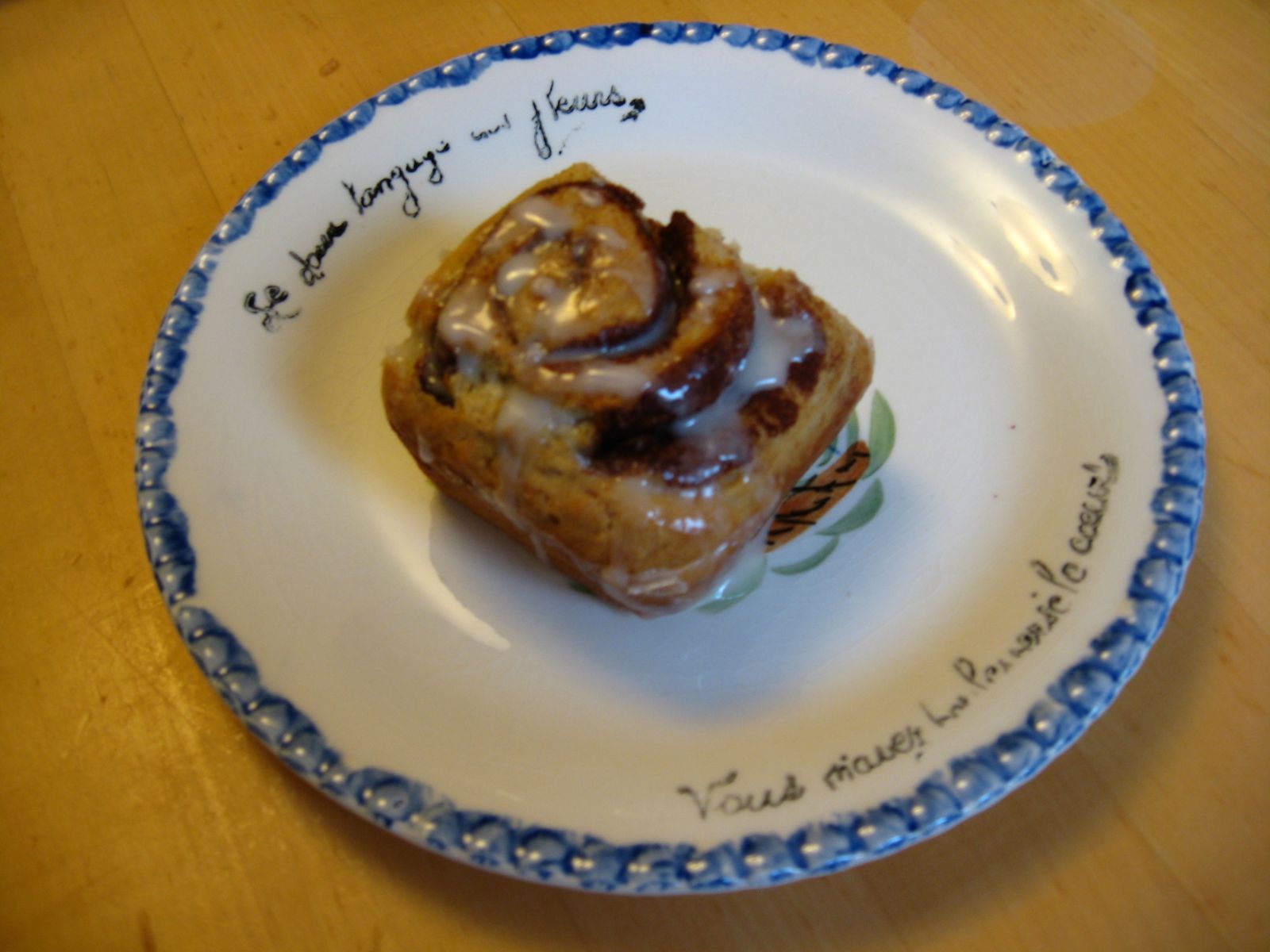 The Yang: This can best be described as an unreasonable but growing desire for cinnamon rolls. For those who know me know that I really don’t eat cinnamon rolls as I generally prefer the salty to the sweet. But I just couldn’t shake this craving no matter how hard I tried. And for the sake of trying something new each week for the rest of my year, I’ve never before tried making cinnamon rolls. The problem I have with the idea of making them from scratch is the time vs. eating factor. Using yeast (as one should) it takes at least 3 hours from start to finish, which means if I want one fresh in the morning with my coffee I’m getting up at 5am on a weekend. Forget that! Then I stumbled across this recipe that PROMISED to be just as good as the yeast version without the yeast and without the wait. I’m sorry I don’t remember where the recipe is from but trust me, it satisfied the craving particularly well.

No Yeast, No Kidding Cinnamon Rolls

2 ¾ cup white flour (plus extra for dusting the counter) 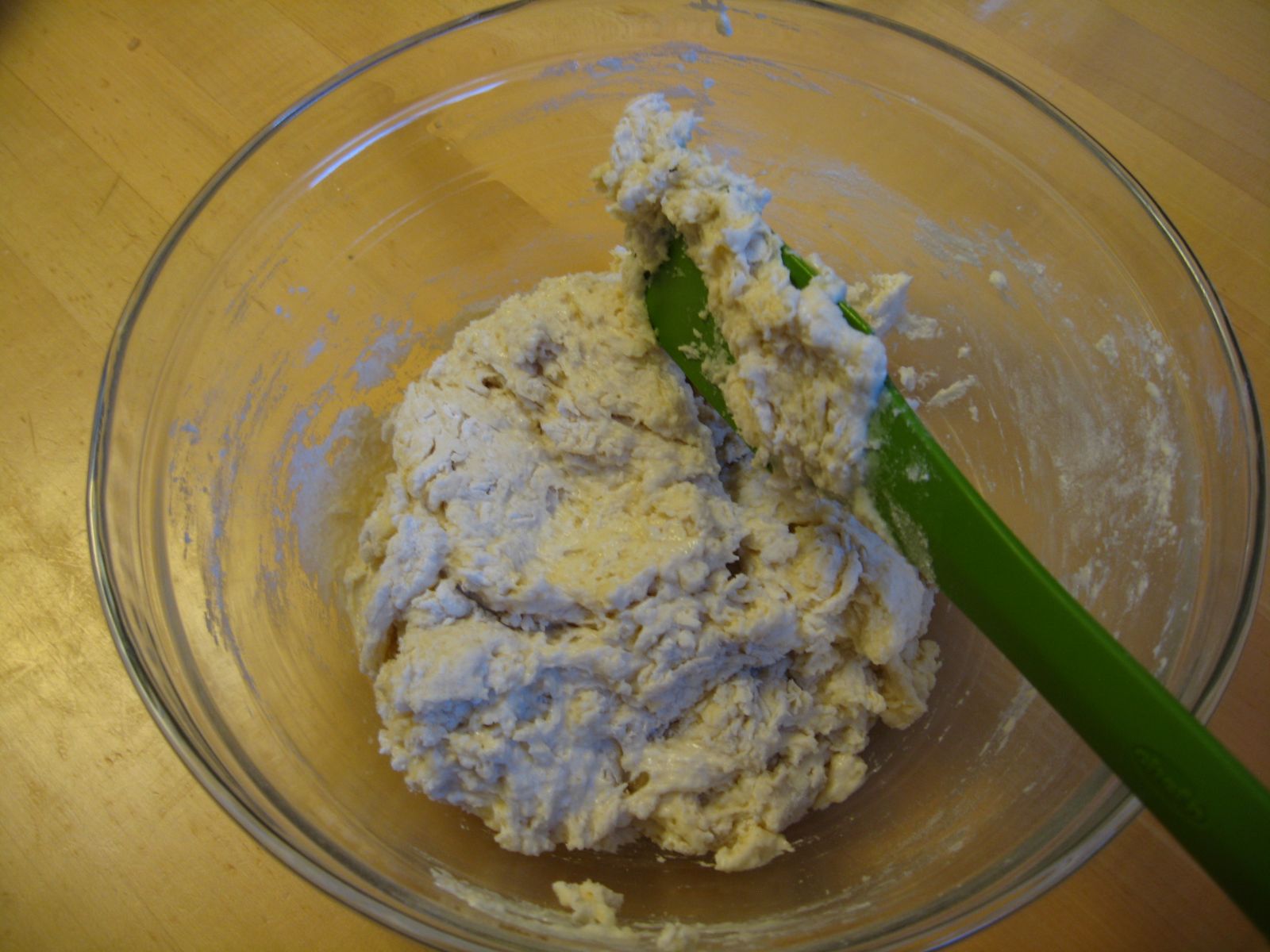 Preheat the oven to 425°F. Don’t wait like I did, because this recipe comes together very quickly.

Mix together the dry ingredients of the filling (the sugar and cinnamon) in a small bowl so you have it ready when you need it.

In a large mixing bowl, stir together the dry ingredients for the dough (the flour, sugar, baking powder, baking soda, and salt). Add the butter and buttermilk and mix gently. At this point the dough will come together very sticky, but don’t worry. Spoon it on top of a heavily floured counter and sprinkle a bit more flour on top so you can mix it. 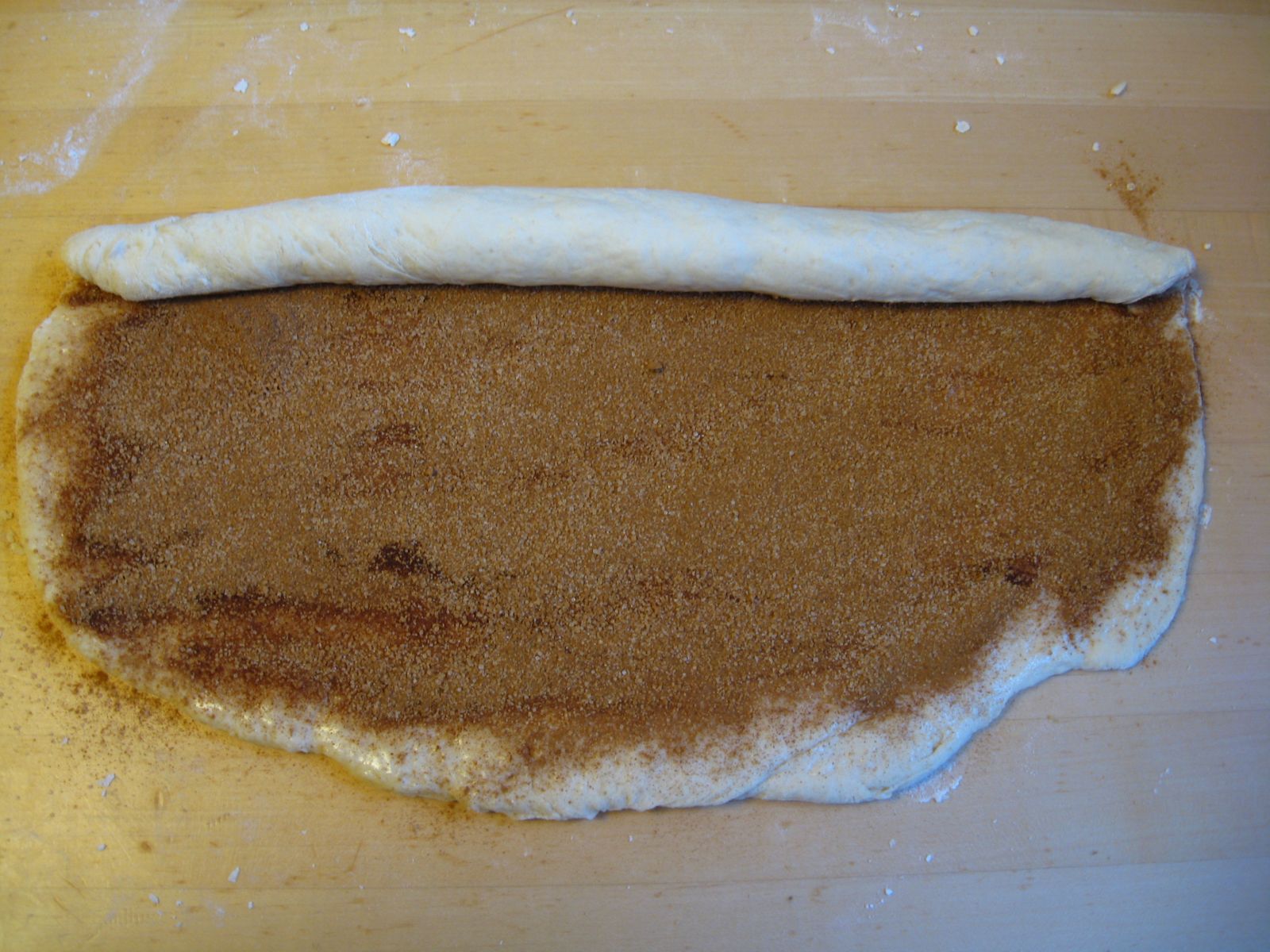 Flour your hands as well and gently knead the dough, adding more flour if necessary, kneading until the dough is both manageable and fairly smooth.

With a rolling pin, roll out the dough into a rectangle approximately ½ inch thick. The rectangle I rolled was about 14 inches in length.

Spread the melted butter over the dough and sprinkle with the cinnamon and sugar mixture. There may seem like a lot but use it all.

Roll the dough lengthwise, somewhat tightly, and cut the dough into rolls that are about 2 inches thick. 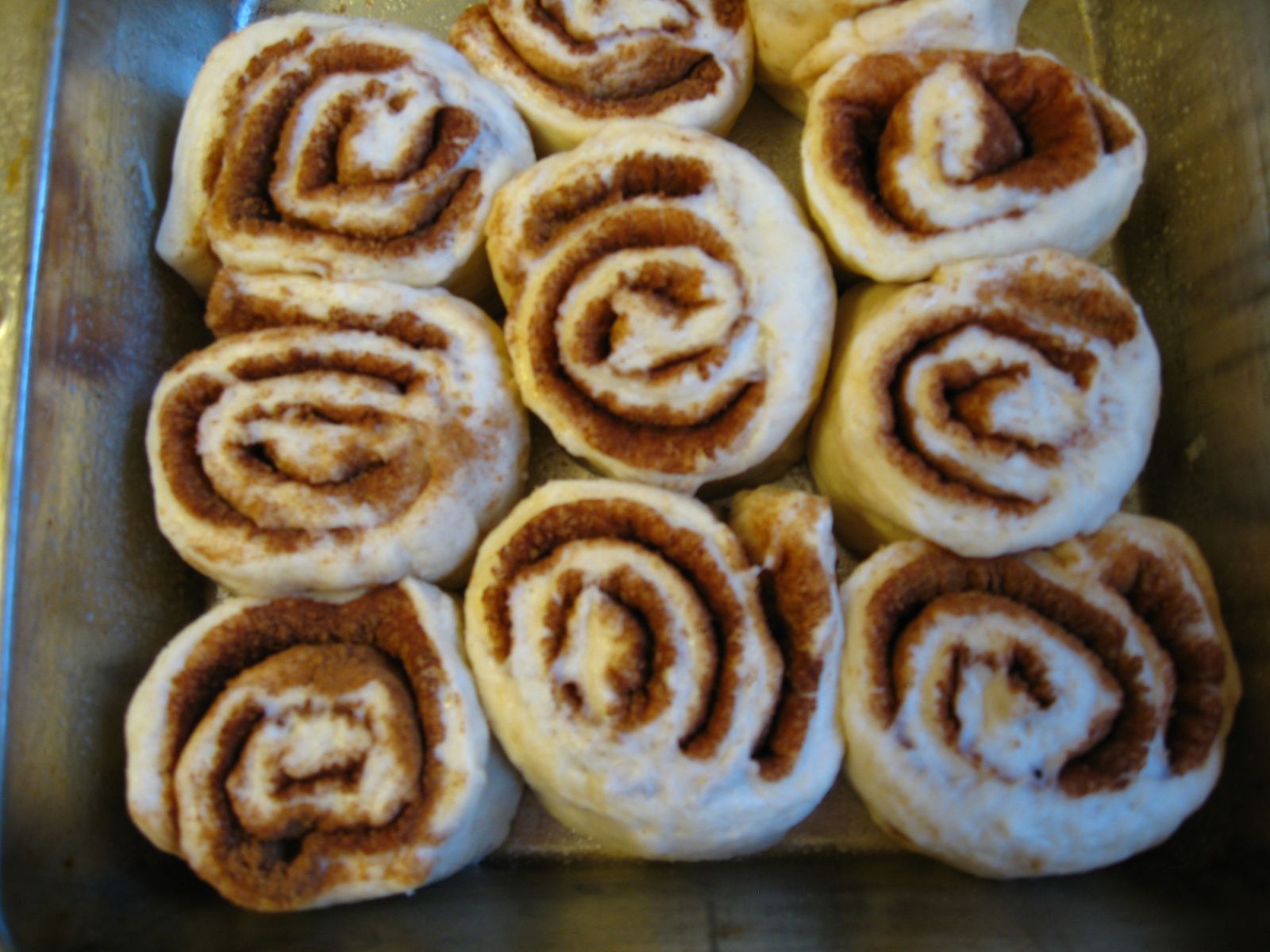 Place the rolls into a lightly greased pan (I used an 8”x8” pan). I started with one roll in the center and built the others around it. They will puff up when they bake and fill in the empty space in the pan.

Bake for about 20-25 minutes, or until the edges have turned a golden brown.

While the buns are baking, mix together your glaze and pour onto the rolls while they are still warm.

Yum - yes yum. While these are a bit more like biscuits than true cinnamon rolls, I was not at all disappointed and hope you aren’t either. 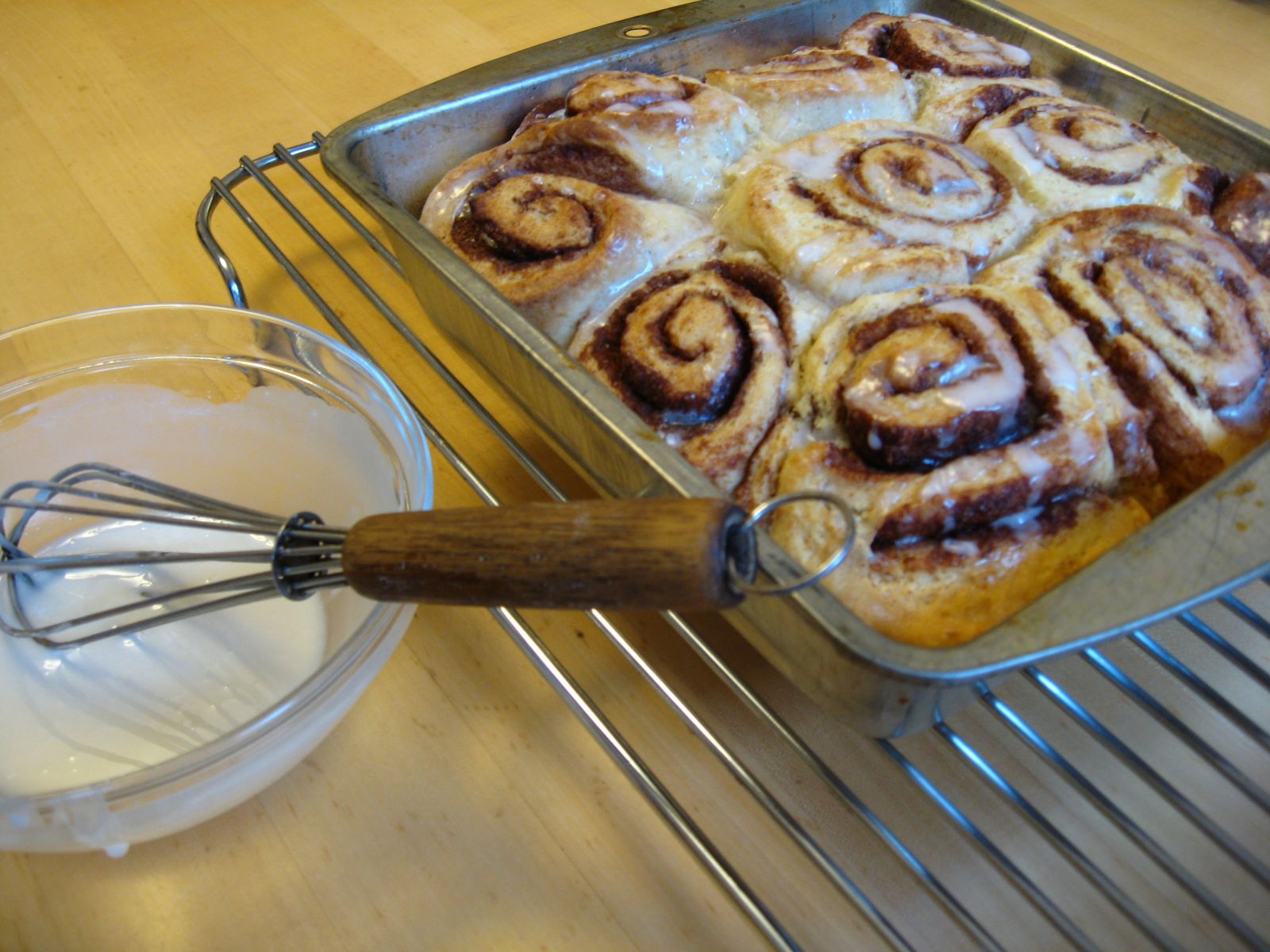