A Year of Inconvenience
For one year, I'm making everything from scratch and forgoing convenience foods. Join me on my journey! By Pam Mehnert on January 31, 2011

The Green Bay Packers just beat the Chicago Bears and are heading for the Super-  duper Bowl. It’s getting pretty exciting here in Wisconsin. Oh yea, and I made some cheese and yogurt. What else did you expect? 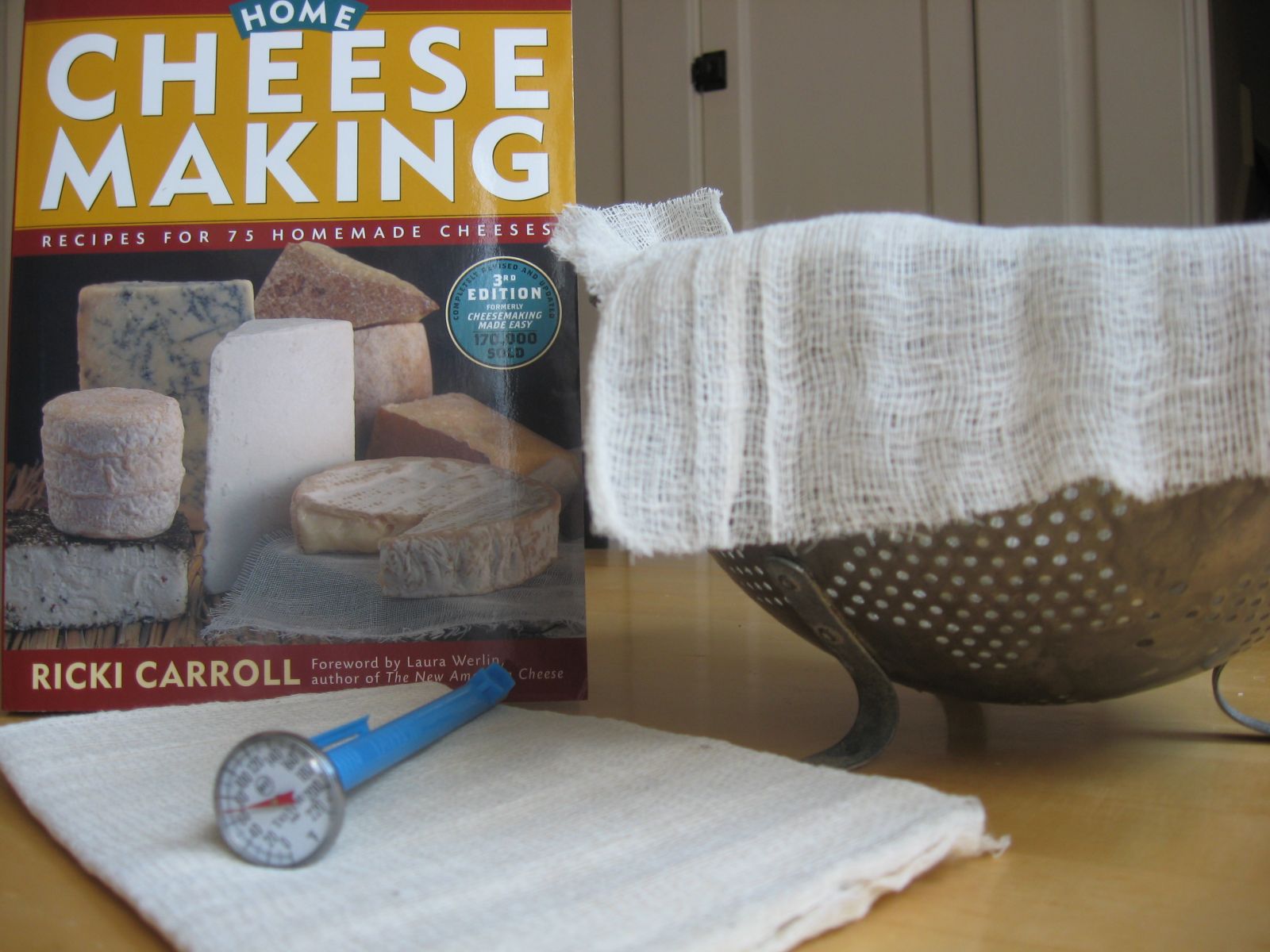 I have to say I’ve been way excited all week, long before this football craze came along. I’ve been hoping to try my hand at a few other types of cheese besides the mozzarella I made a week or so ago, perhaps something quicker and easier to build up my confidence a bit.

When I was in college back in… well it doesn’t matter what year it was… when I was in college I had a yogurt maker. Making yogurt was one of my first ventures into natural foods and hey, everyone was doing it. All I knew of making yogurt were the instructions that came with the yogurt maker. Heat some milk, add some plain yogurt as the culture, pour into the small glass jars and snap on the lids, then turn on the machine. There it sat quietly on the counter of my apartment, doing its yogurt magic overnight while I slept in the next room. The following morning I would find something in those jars that was perhaps slightly runny, but pretty much looked and tasted like yogurt. 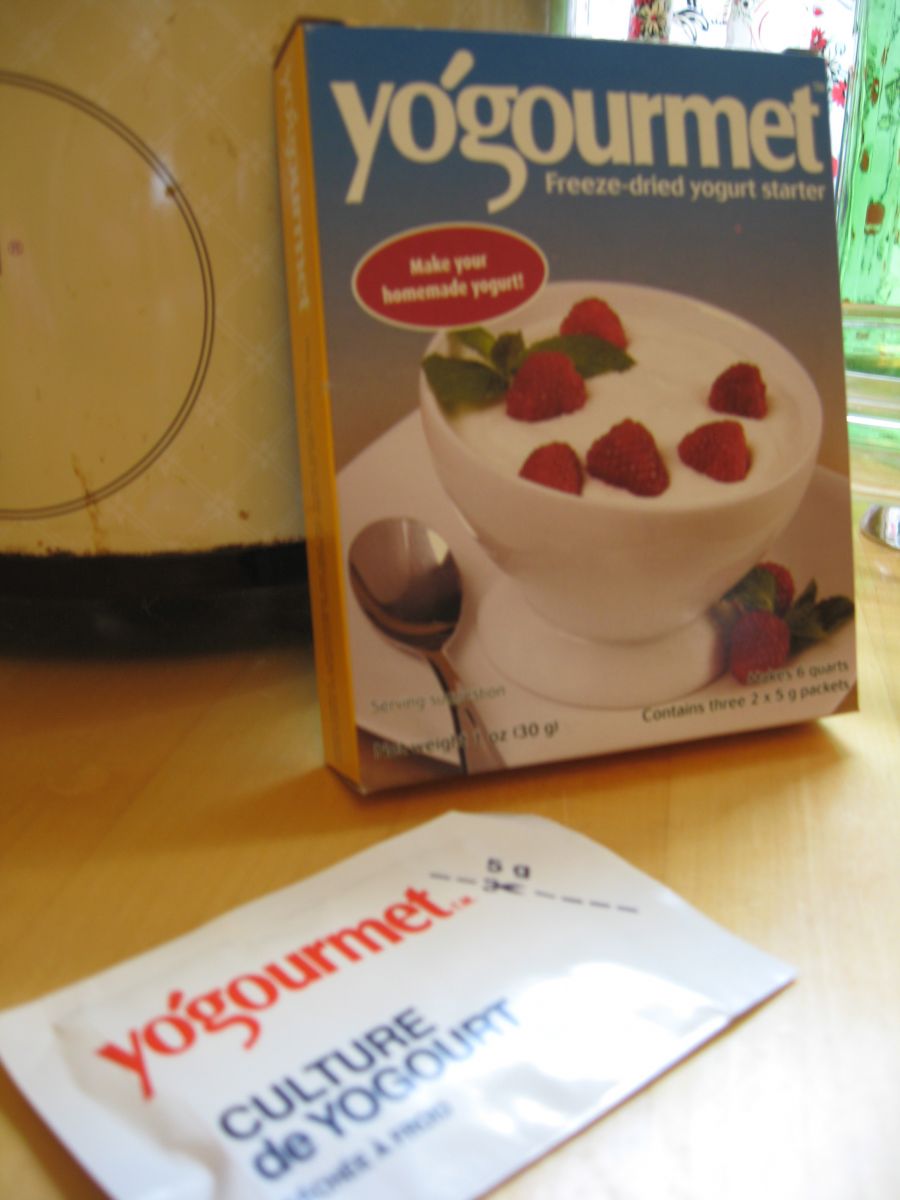 Fast forward to this past week. I no longer have that yogurt maker of my college days and while a friend offered to lend one to me, I had been reading enough online about making yogurt in a Crockpot and decided that would be my maker of choice. Okay I’m really trying to curb my enthusiasm here. Making yogurt in a Crockpot is totally awesome! In fact I’m trying my best to eat what I made quickly enough so I can make another batch this week. What’s so great about this method is that I know a lot more about food than I did when I was 20, and understanding what it takes to get the consistency I wanted takes nothing more than a bowl, a colander and some cheesecloth. I now have yogurt, Greek yogurt, and something that resembles sour cream in my refrigerator – all from one batch of Crockpot yogurt.

Before I get to the yogurt recipe I also made some cheese this week in preparation for a photo shoot and video that’s happening this coming Tuesday. Oh, I didn’t mention that earlier? Yea, it’s funny what happens when your communications director at work sends out a press release on your blog project. Seems like I got myself involved in an upcoming story and online video for our local paper, as well as a spot on a morning show this coming Friday. I’m excited and a bit nervous. And yeah, I’ve been cooking and cleaning all weekend in preparation. So the cheese recipe, “queso blanco”, will complete the meal I’m making, which is my pork carnitas on homemade corn tortillas, topped off with some homemade queso blanco and homemade yogurt sour cream.

Okay, here are the really easy steps to making Crockpot yogurt. My Crockpot, which I’m guessing is about 20 years old, didn’t quite get the milk to temp in the time the recipe said it would, so I think I have a shortcut for the next time I make it that I’ll include in the steps to follow. I honestly don’t believe you really need a Crockpot, and I’m going to try it without the next time I make it. 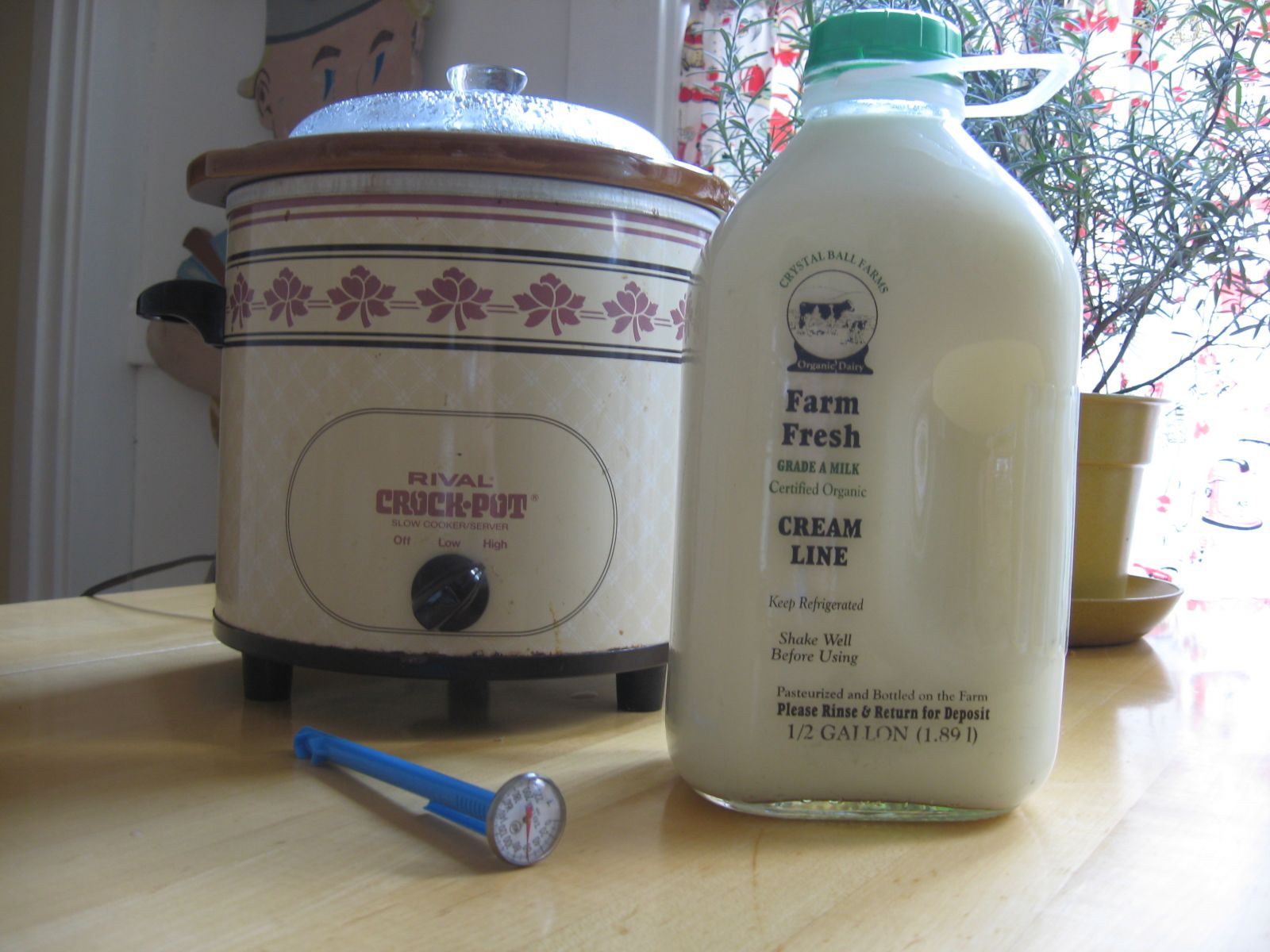 What you’ll need to make the yogurt is:

1 Crockpot or slow cooker of your choice

1 kitchen thermometer (this is science baby, make sure you have one and use it)

So first, you need to get your milk up to temperature. All signs point to using milk that isn’t ultra pasteurized, just like in making cheese. I used skim milk and it didn’t affect the texture or taste of the yogurt, at least not to the point I expected it would.

The recipe I used said to set your Crockpot on low for 2 ½ hours to get the milk between 180 – 190° mainly for the purpose of creating a sterile environment for inoculating the milk with yogurt culture. My 20-year old Crockpot took 4 hours, so next time I’m just going to bring it to temp in a pot on the stove.

Next, once it reaches 180° you need to let the milk cool down to 110° which is the magic temperature for inoculating the milk. It took about 2 hours for the milk to cool down to that temperature so don’t wander off too far, you’ll want to keep checking. 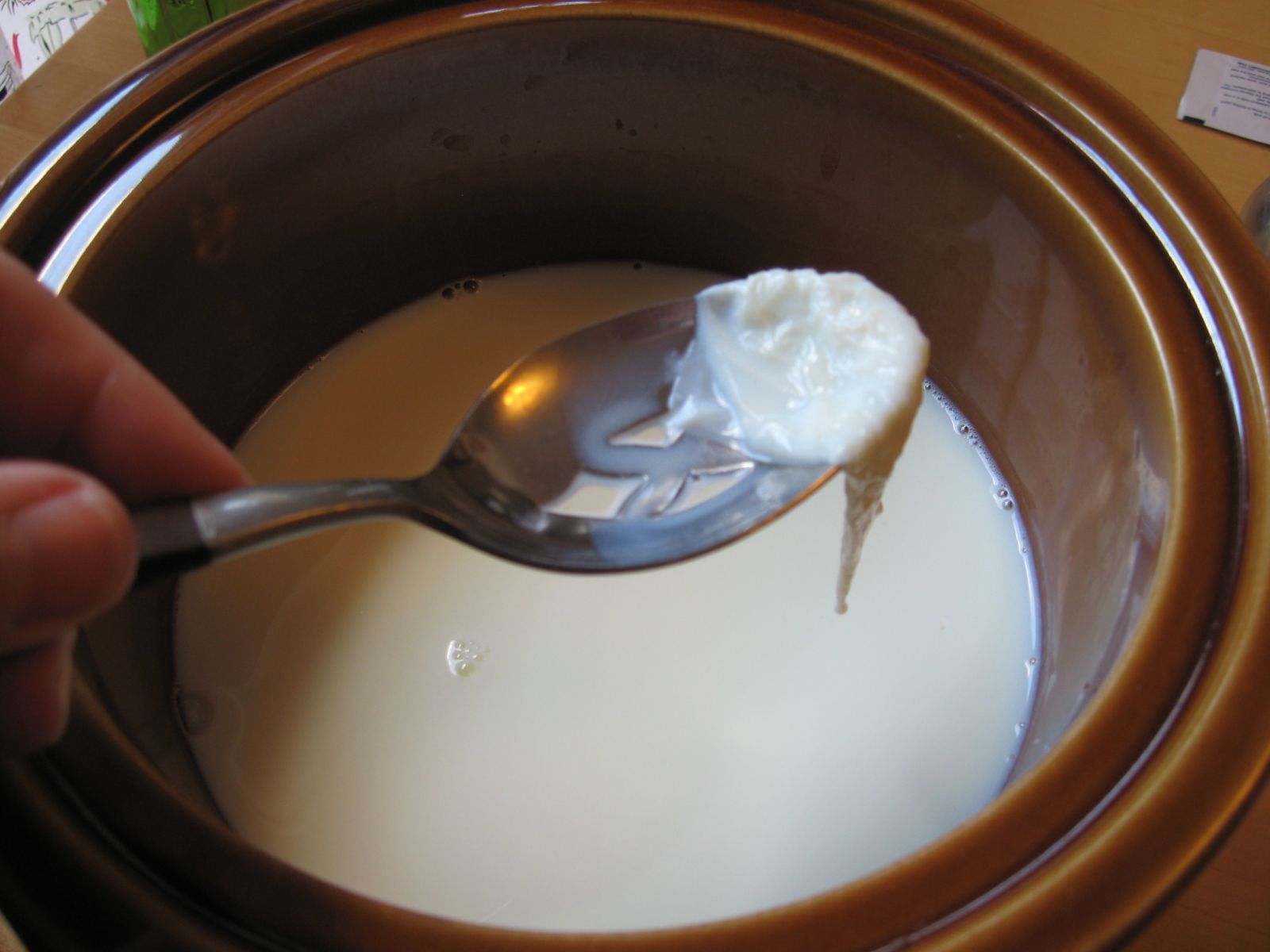 Once the milk is at 110° you’ll notice it has formed a skin on the top while cooling. Remove the skin and discard. Take about 1 cup of milk out of the pot and using a whisk, mix it with the yogurt culture. Now add that back to the pot of milk and whisk that mixture.

Grab your bath towel and take your Crockpot of inoculated milk to a warm part of the house. With the cover on the Crockpot, wrap the whole baby up in the bath towel and let it sit in that warm spot for about 8 hours. That’s right, 8 hours. You need to plan your day out around yogurt, both the heating and cooling, as well as allowing yourself the full 8 hours for it to create yogurt magic. 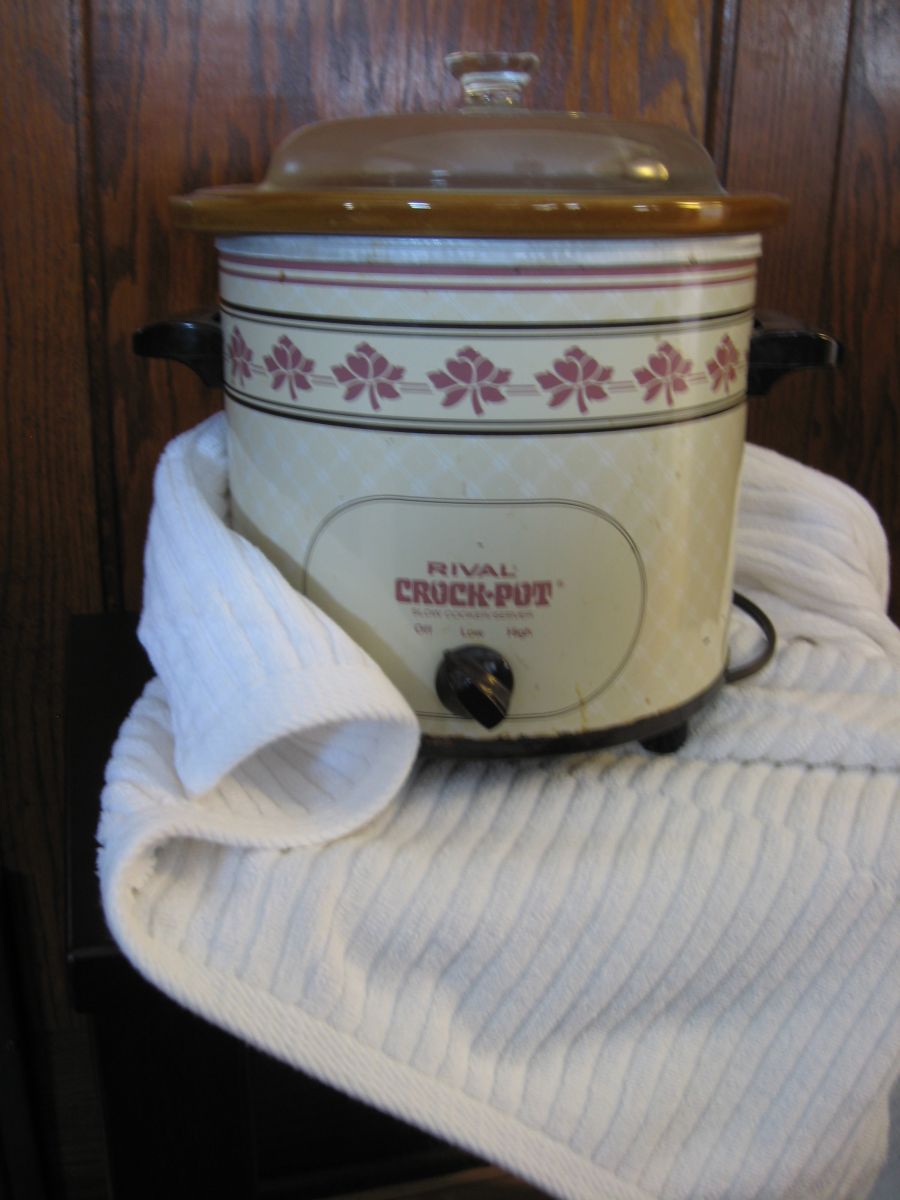 After 8 hours you have yogurt. You can put your Crockpot insert into the refrigerator if it’s time for bed, or portion out the yogurt into glass or plastic containers. I lined a colander with cheesecloth, set the colander over a bowl, and took some of the yogurt out, putting it into the cheesecloth to make ‘sour cream’. I covered the colander with plastic wrap and set it in the refrigerator overnight. The next morning I had a very thick yogurt I’m going to use as sour cream -  to top off the pork carnitas!

The next day I also took some more of the yogurt and placed it into the cheesecloth lined colander to thicken it up a bit to the consistency of Greek yogurt. That took about 3 hours in the refrigerator.

So it’s true, I’m a yogurt-making convert and this house is going to be filled with the dairy air for at least the next 12 weeks to come. I only have twelve weeks left in my year - I can hardly believe it.