A Year of Inconvenience
For one year, I'm making everything from scratch and forgoing convenience foods. Join me on my journey! By Pam Mehnert on November 1, 2010 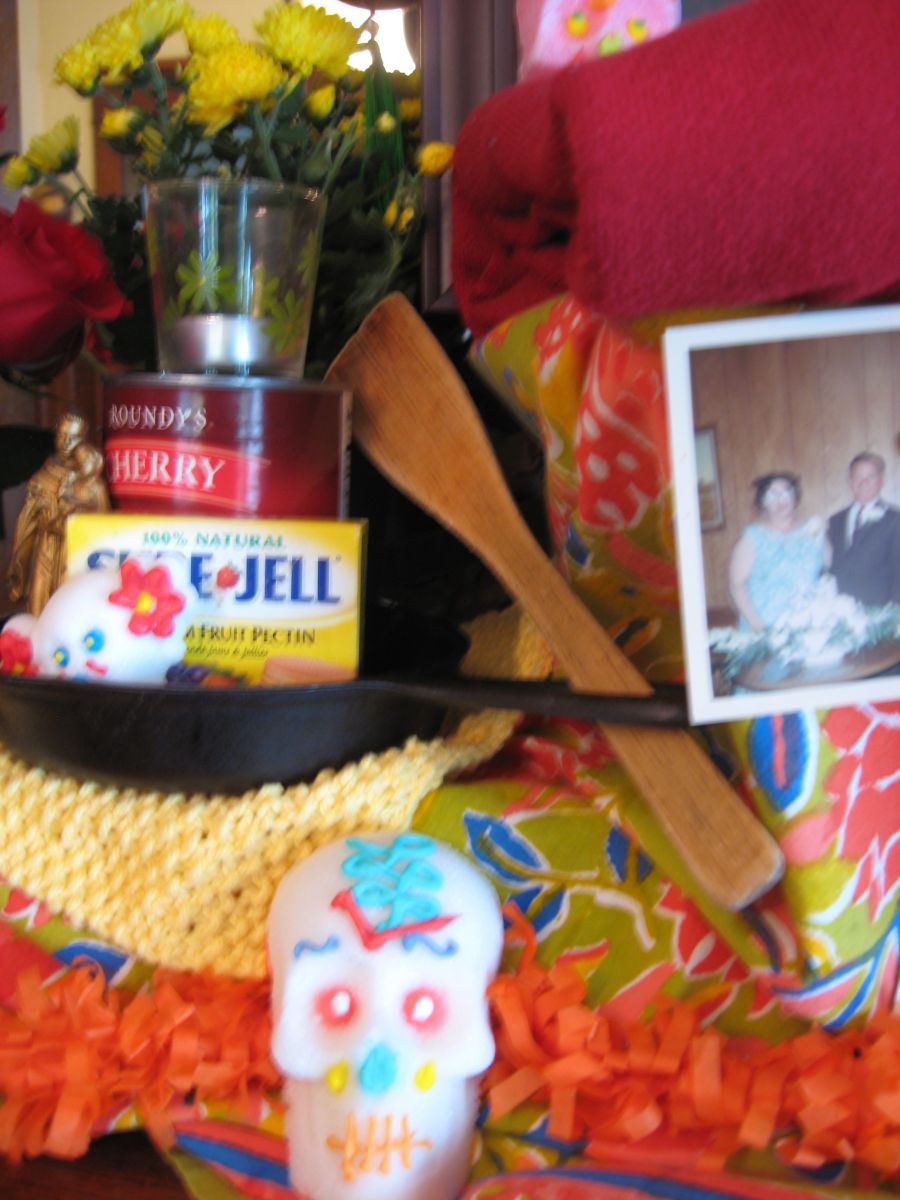 The Day of the Dead is a holiday that will be celebrated by many people both today and tomorrow (November 1 and 2), whether they are of Mexican heritage or not. The holiday, which focuses on the gatherings of he three “F’s” – family, friends, and food – is of honor and remembrance of those who have passed on before us. The traditions include building private altars (ofrenda) to honor the deceased using sugar skulls, flowers, photos, memorabilia, and the favorite foods and beverages of the departed. In Spain and Mexico there are festivals and parades, which often start at the gravesite to lead the spirits back to the home to party, guiding their way by spreading flower petals along the way.

My first memory of this celebration was years ago when my friend Avie had a party to gather us together to remember a mutual friend who had recently passed away. What I had expected to be a mournful gathering turned out to be a celebration of our friend’s life, with the clear intent to not lose our any of our fond memories of him. This year we had our annual Dia de los Muertos celebration on October 31, but all of the food prep happened in week 28. 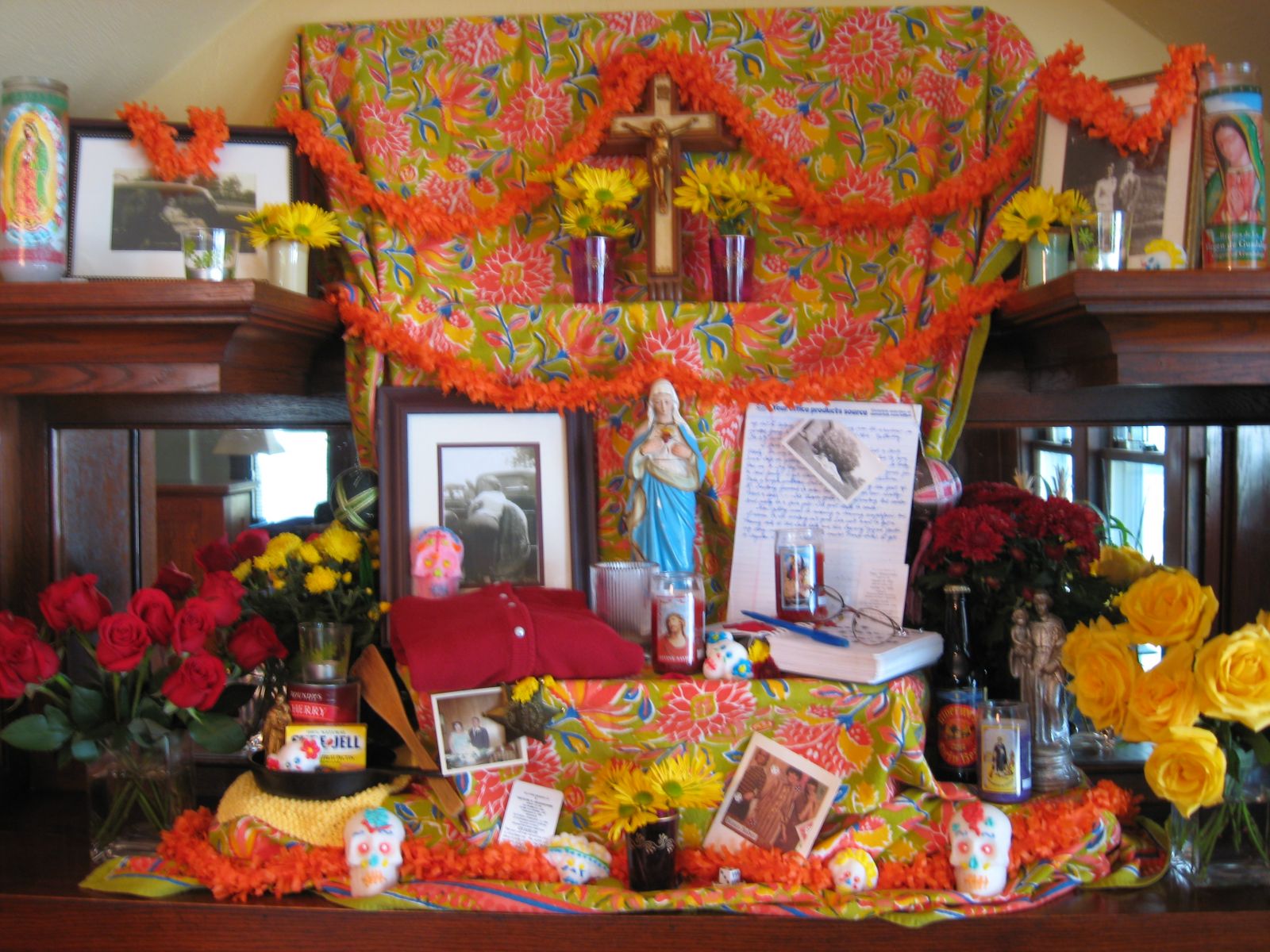 Lisa built the ofrenda in memory of her Mom, Peggy who passed away just last October, and her Dad, Teddy who died in 1994. Peggy loved to cook – I guess that’s where Lisa gets her culinary passion from - and she was also never too old to try new foods. We introduced her to her first Indian meal when she was 80 years old, about five years ago. She really loved it when we would bring her fresh fruit from Outpost, or bake something tasty that she had never tried before. Even at 85 she was still cooking for herself and her friends in the senior retirement home where she lived. The day she passed away Lisa, her sisters and I went to her Mom’s apartment to begin to deal with the details of her death, right after leaving the hospital. It was also lunchtime, so we opened the refrigerator to see if we could pull something together from its contents. There in a Tupperware container was a macaroni salad, likely made by Peggy just a few days before she had her stroke, three days before she died. We all saw it as a sign, that she didn’t want us to miss lunch just because of her. That macaroni salad will forever be in my memory as one of the most special meals I’ve eaten. 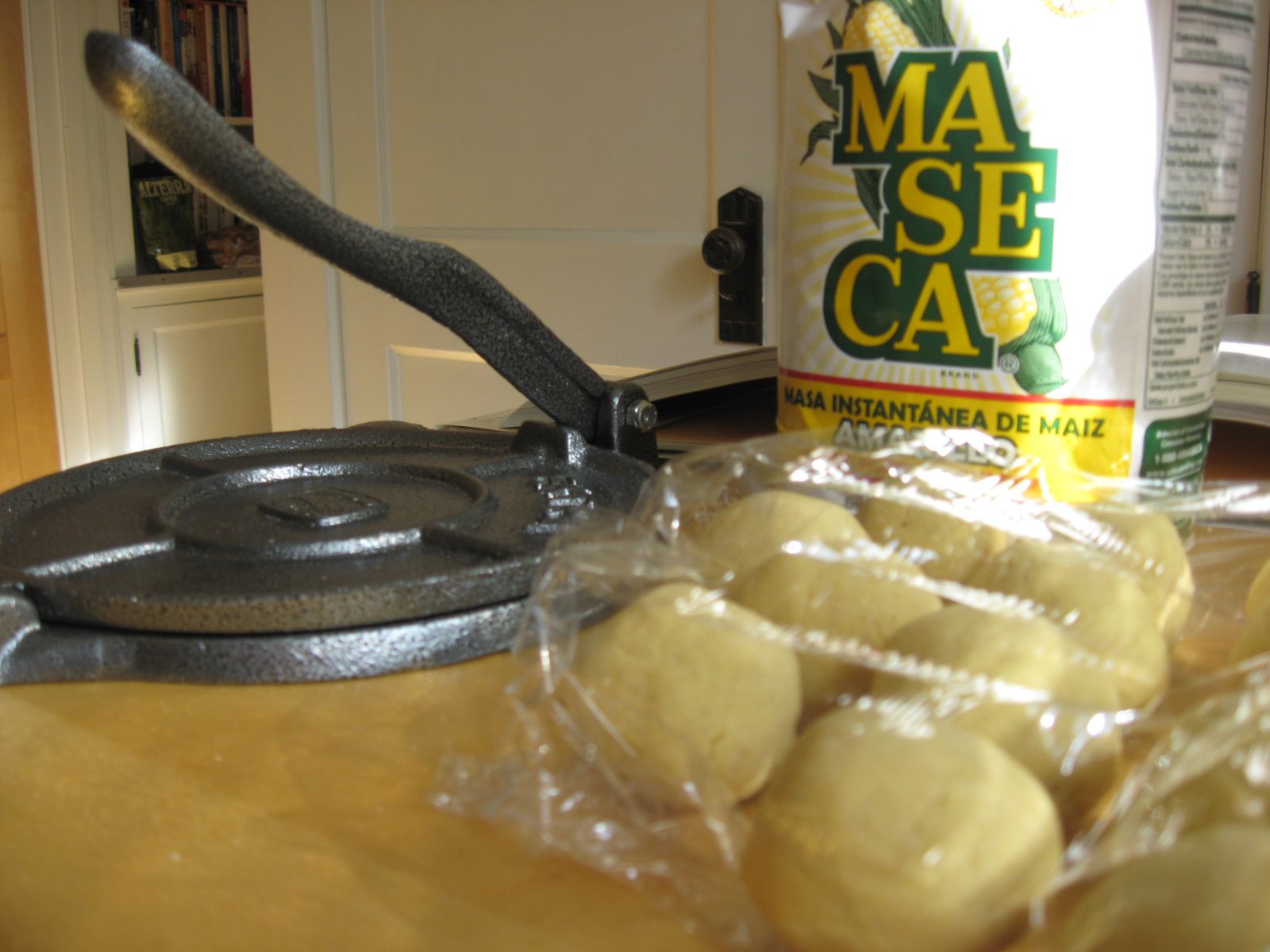 To cook for our Dia de los Muertos celebration, I was finally going to have to come to terms with the fact I needed to make corn tortillas. Remember I got the tortilla press for my birthday back in September? What kept me from trying corn totilla were all the horror stories from others – primarily the sticky dough that was very hard to handle. Even recipes I was reading talked about the importance of getting the dough just right – not too dry, not too sticky. Then along came Rick Bayless, not literally, but from his tortilla recipe, where his words of wisdom gave me the encouragement to set my hand at making tortillas. He described the dough as “looking and feeling just like cookie dough.” Since I’ve been doing a lot of baking the past six months, I now understand the importance of dough texture, and how getting it right really makes a difference in the end product. I knew I could get this dough right, and right I got it on the very first try. I used my baker’s scale to weigh 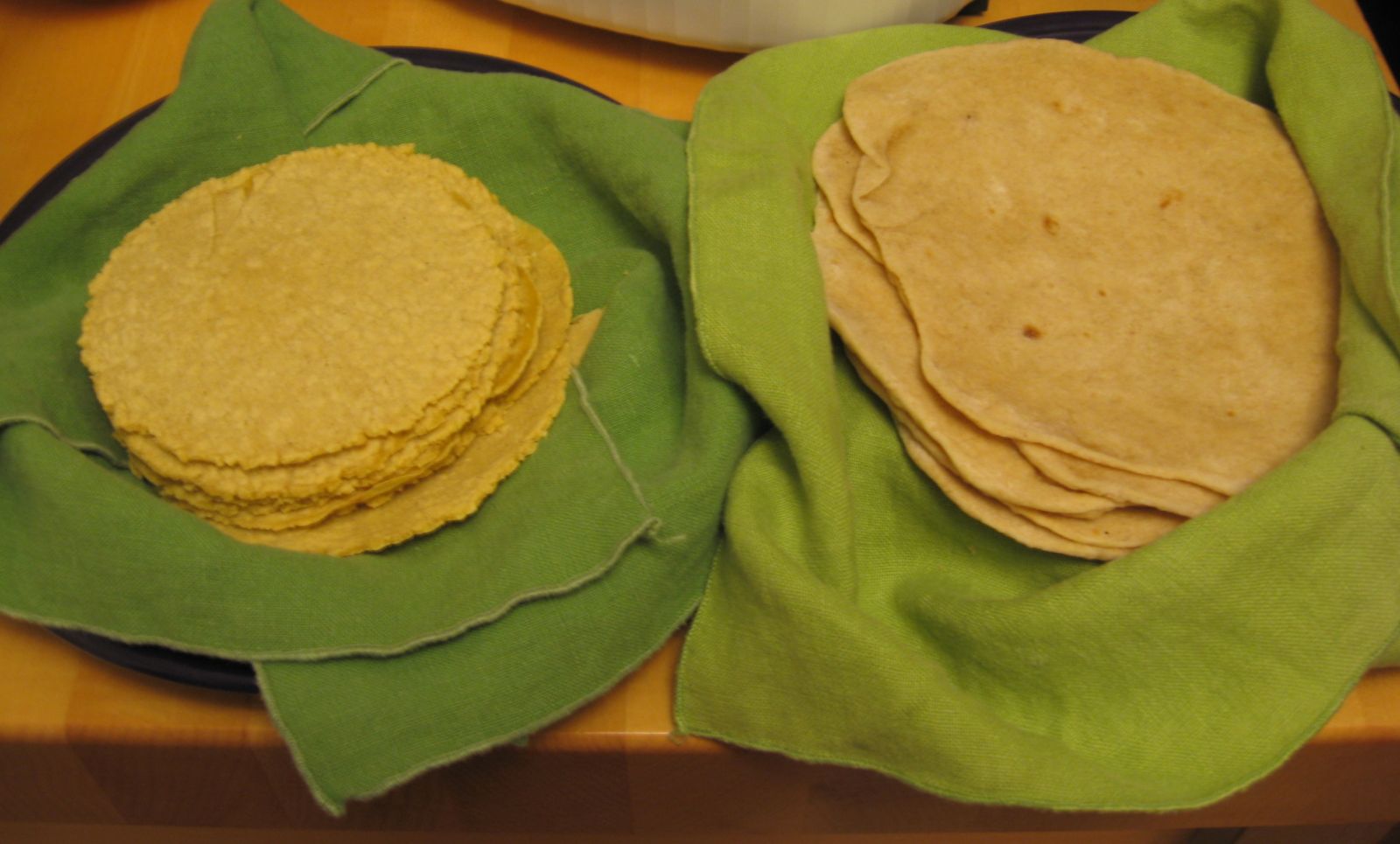 out the dough pieces so I would get uniform tortillas (and get 16 pieces total). I was really proud of the end result, and my dinner guests were totally impressed with the spread we put out for them: pork carnitas, tomatillo chicken, corn and flour tortillas, corn salad with roasted poblano pepper and zucchini, drunken beans (made with beer, bacon and salsa), homemade pico de gallo and tomatillo salsa and guacamole. Oh yeah, and Lisa made some Mexican chocolate cupcakes with cinnamon butter cream frosting for dessert.

This recipe came about when I realized the day before, that I didn’t buy enough pork to serve eight hungry dinner guests. I still had some tomatillos left from the last garden harvest, and I had already purchased chicken to have on hand for some other meals this week. Little did I realize what a hit this recipe was going to be that night. I can’t wait for the leftovers!

Start by roasting the tomatillos, garlic and jalapeno pepper. Slice the jalapeno in half and remove the seeds. Put the pepper and tomatillos on a large baking sheet and place them under your broiler, on the highest level you can get your oven rack. As the tomatillos begin to roast and burst open, turn them over until both sides are blistering. In my oven this took about 10-12 minutes.

To make a sauce, put your roasted tomatillos, garlic, jalapeno pepper, cilantro and limejuice into a food processor and process until smooth. 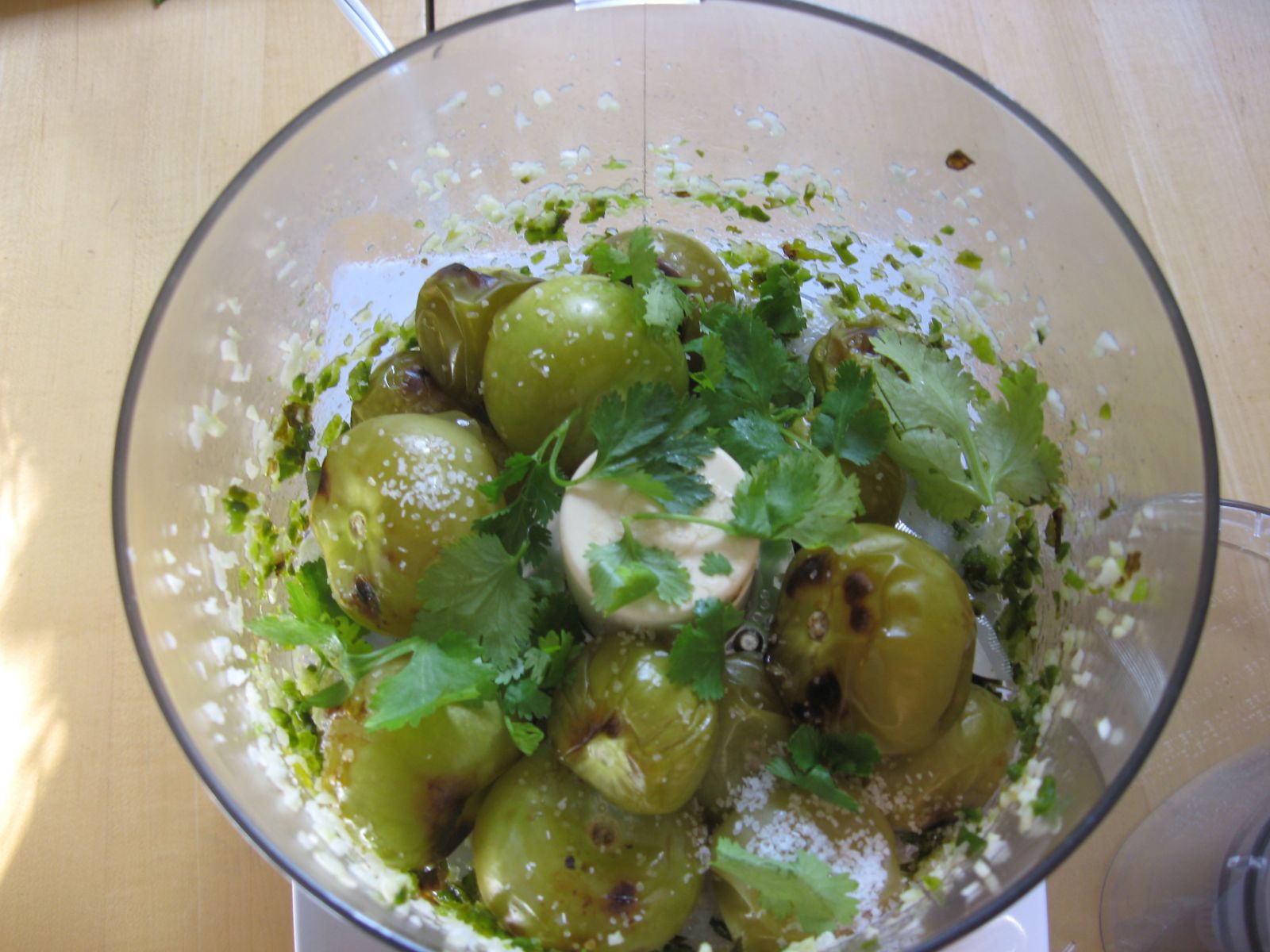 Heat your oven to 325°. Salt and pepper both sides of all of your chicken parts. Using a large sauté pan on your stovetop, heat up the olive oil (don’t let it smoke) and brown the chicken, about 5 minutes on each side. Remove the chicken from the sauté pan and place into a roasting pan. Now take the tomatillo sauce and use it to deglaze your sauté pan, scraping up any of the brown bits of chicken and oil. Pour the tomatillo sauce over the chicken, and bake in the oven for about 30 minutes. This method will poach the chicken quite nicely.

When the chicken is done, take each piece and scrap off most of the tomatillo sauce. Using two forks, shred the chicken pieces by pulling away at the meat in the direction of the grain of the meat. When you have shredded all of the chicken, take the remaining tomatillo sauce and add the sour cream to it, stirring it in until well blended. Now add the sauce back to the chicken, stir until well combined, and it’s ready to serve in some homemade tortillas with fresh salsa. Ole!

I couldn’t resist adding this recipe too. It’s been an old standby for many years (from the 1998 Best of Gourmet Collection.) Mine was made with fresh pico de gallo, which made it even better.

Soak beans in cold water, stored in your refrigerator, for 1 day.

Drain beans and halve the onion. In a 5-quart kettle, simmer beans, onion, lard or oil, and epazote in enough water to cover the beans by 2 inches. Simmer until beans are almost tender, 45 – 90 minutes depending on your beans. Add salt and simmer until tender, another 15 minutes more. Drain all through a colander.

Chop the bacon and in a large heavy skillet cook it over moderate heat, stirring until browned. Add the beans, fresh salsa, beer and salt to taste and cook, stirring until most of the liquid evaporates (about 10 minutes).