A Year of Inconvenience
For one year, I'm making everything from scratch and forgoing convenience foods. Join me on my journey! By Pam Mehnert on August 31, 2010 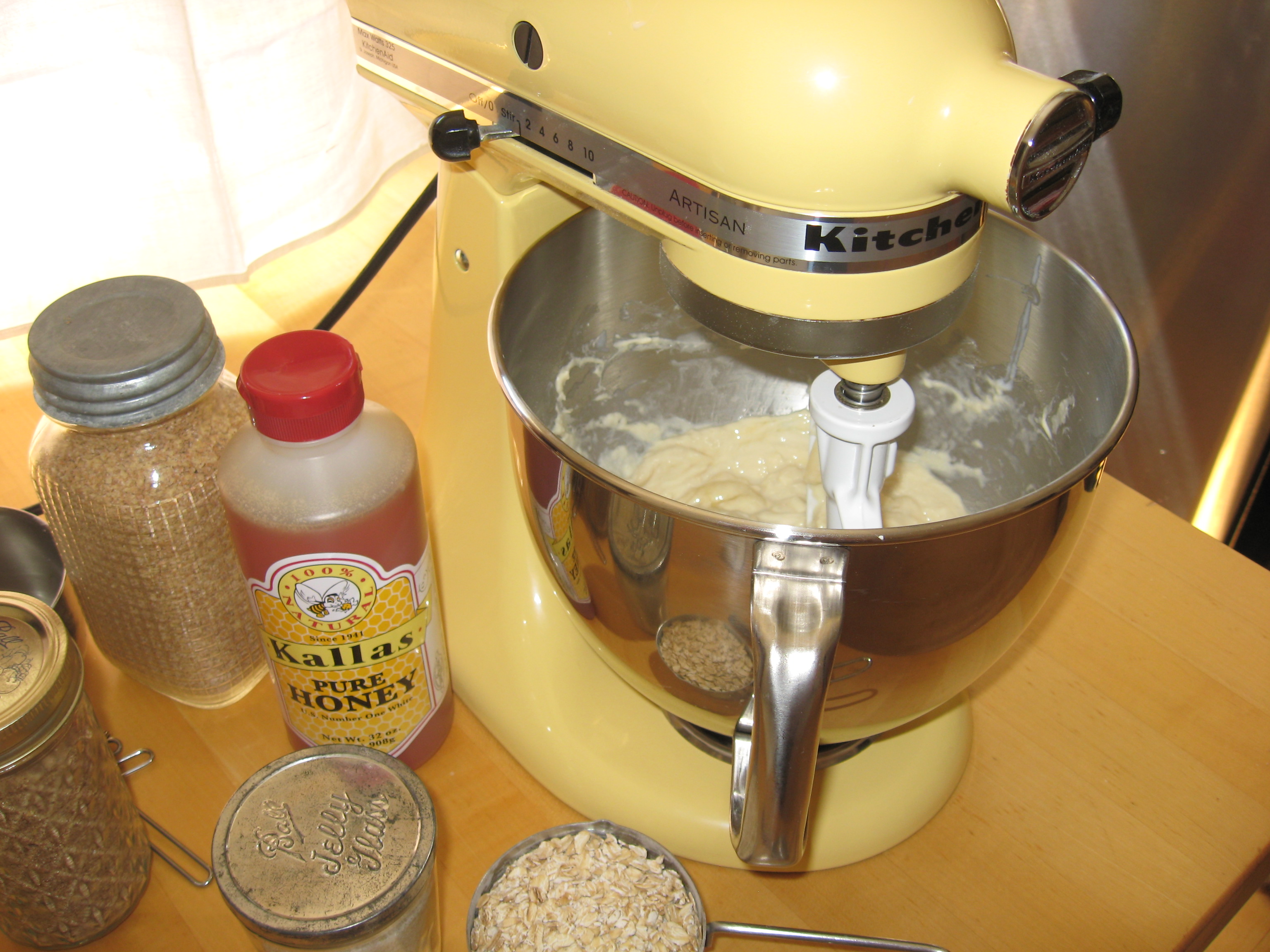 WAAAY back in week twelve (my how the time flies), I professed to all of my readers, my true love for baking - to be specific - the baking of bread. Before I started my year of inconvenience, baking was a hobby I enjoyed on a number of cold winter weekends, as it filled the house with the warmth of the oven and a fragrance that might compel me to give up my first born. (Good thing I never had one!) So never did I imagine I would be baking bread very regularly, in fact weekly, throughout the entire summer of 2010.

So far on my journey I’ve baked nineteen loaves of bread (sandwich and/or English muffin), and my partner Lisa has baked three banana breads. Nineteen weeks – nineteen breads. You’re starting to get the picture. I will admit that baking bread has been a real chore and not the “hobby” I once enjoyed. A chore, that was, until two weeks ago when I discovered the magic that is “the sponge.”

When I refer to a sponge I’m not talking about a cartoon character named Bob, or the soggy square sitting by your kitchen sink. In baking, a sponge is made up of water, yeast, and flour – often with a bit of sugar to help the yeast to grow or activate. This mixture is often left to sit overnight and allowed to ferment and bubble into a mostly sticky mass that can then be used to create bread or rolls. Most of the artisanal breads with heavy crusts are made with a sponge.

The sponge is my new friend indeed - and really when it comes down to it – the sponge is the reason anyone can bake bread at home and get something that is not only delicious, but a great replacement for anything you might buy from the grocery store.
I found this recipe in a book I didn’t know I had on my cookbook shelf, “The Baker’s Dozen Cookbook.” I’ve adapted it only slightly from the original recipe of Peter Reinhart.

Don’t be afraid to bake this – it is absolutely delightful!

To Make The Sponge: 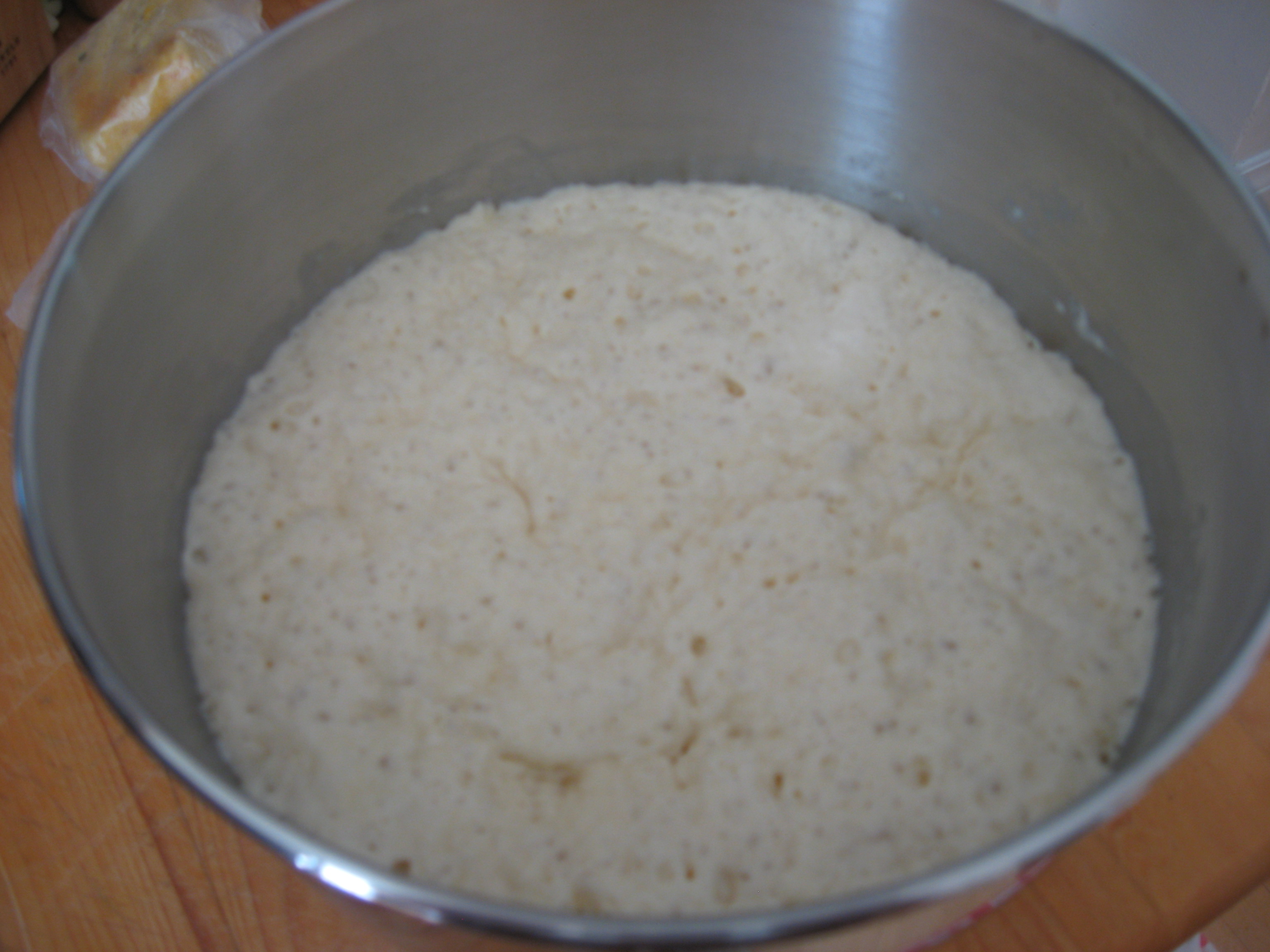 First step is to make the sponge. Combine the water, yeast and honey in the bowl of your mixer and let stand for about 5 minutes. The water will look slightly creamy when ready. Add the flour to the mixing bowl and mix for about one minute. (If you’re mixing by hand the book says you need about 100 strokes.) Cover the bowl with plastic wrap and let the mixture sit at room temperature for about 2 hours. This is when the magic happens because when you return to look at your sponge you’ll find a bubbly, yeasty, sticky mixture that smells like heaven! 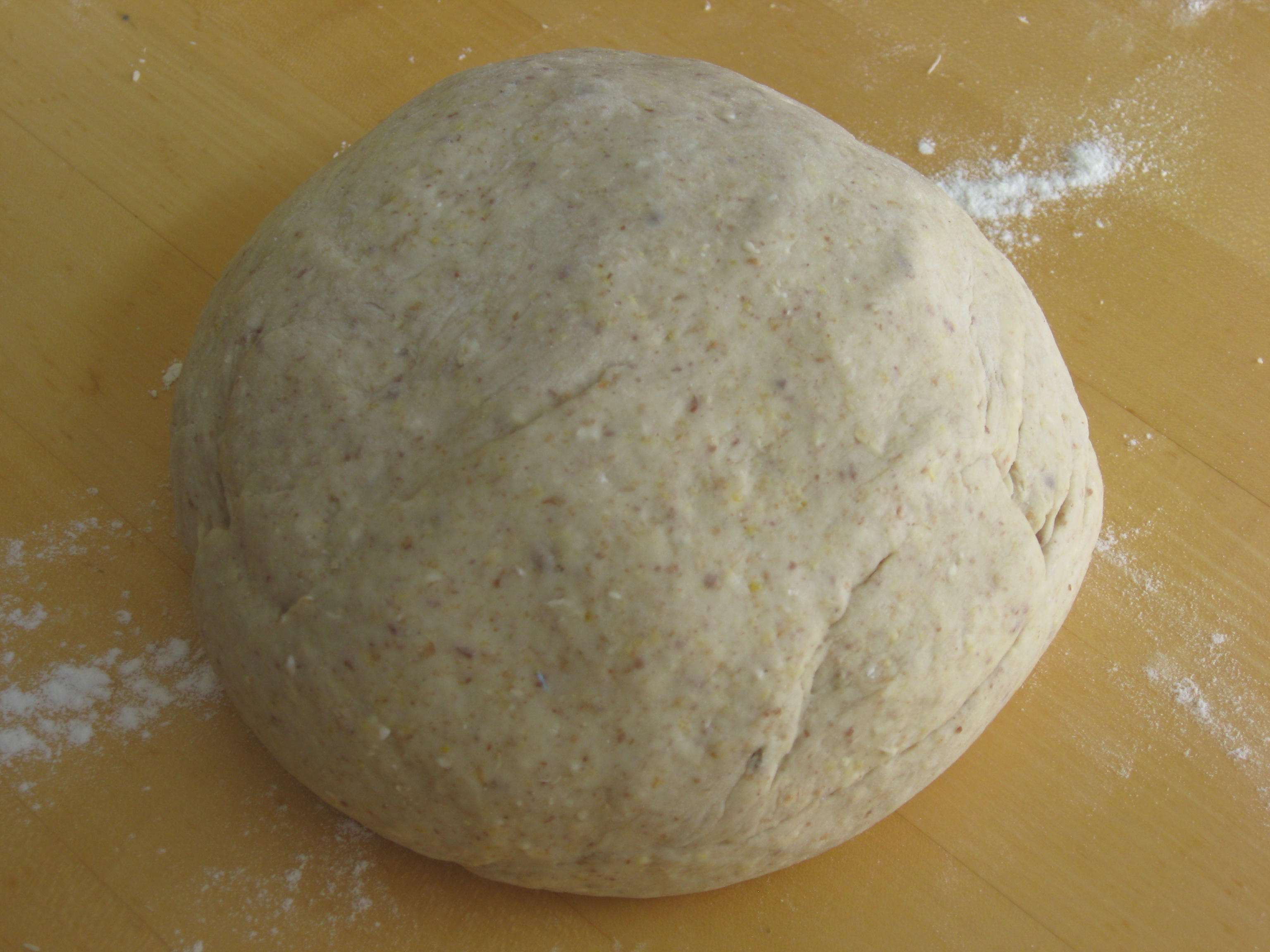 Return the mixing bowl to the mixer stand and add the buttermilk, honey, salt and one cup of mixed grains. Make sure that is well combined before switching from the mixing paddle to the dough hook. Take your remaining cup of whole-wheat flour and add it very slowly with the mixer running on medium low speed, kneading the dough for about 10 minutes. If you’re kneading the dough by hand, knead in as much of the flour in as you need to make it smooth but just a bit tacky, for about 10 minutes.
Oil a large bowl (I use olive oil) and put the dough ball into the bowl, coating it on all sides. Cover tightly with plastic and let it rise for two hours. After two hours you want to punch the dough down to shape into a loaf. The first time I punched down dough it felt like undoing everything the yeast had worked so hard for over the past few hours, but then I learned that it’s all part of the magic.

Lightly oil a bread pan. To shape the dough into a loaf, press it flat into a rectangle about ½ inch thick. Bring the two long sides together and pinch the seam closed. Now fold in the two short sides so it’s loaf shape. Place the folded sides down in the pan, cover with a damp towel or greased plastic wrap, and let rise for another 1 ½ hours. It should be well above the pan when it’s ready for the oven. 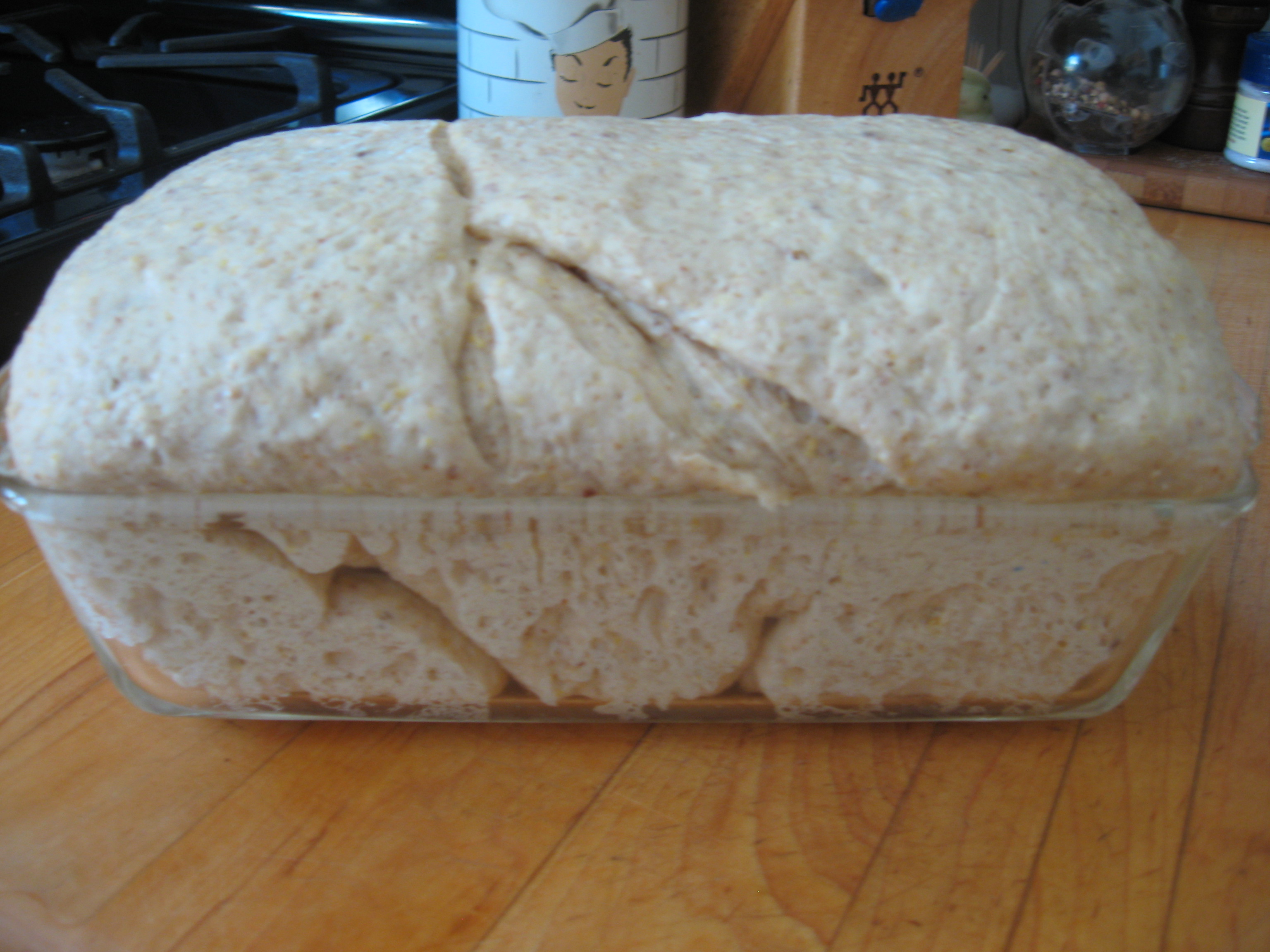 Here’s what Peter Reinhart has to say about this bread: “The challenge in making multigrain breads is providing enough gluten to enable the dough to rise. Since no other grains have as much gluten as wheat, adding other grains dilutes the overall gluten in the dough. This recipe uses a ratio that balances the unique flavors and textures of non-wheat grains but provides enough gluten to produce a light loaf with nice webbing in the crumb.” 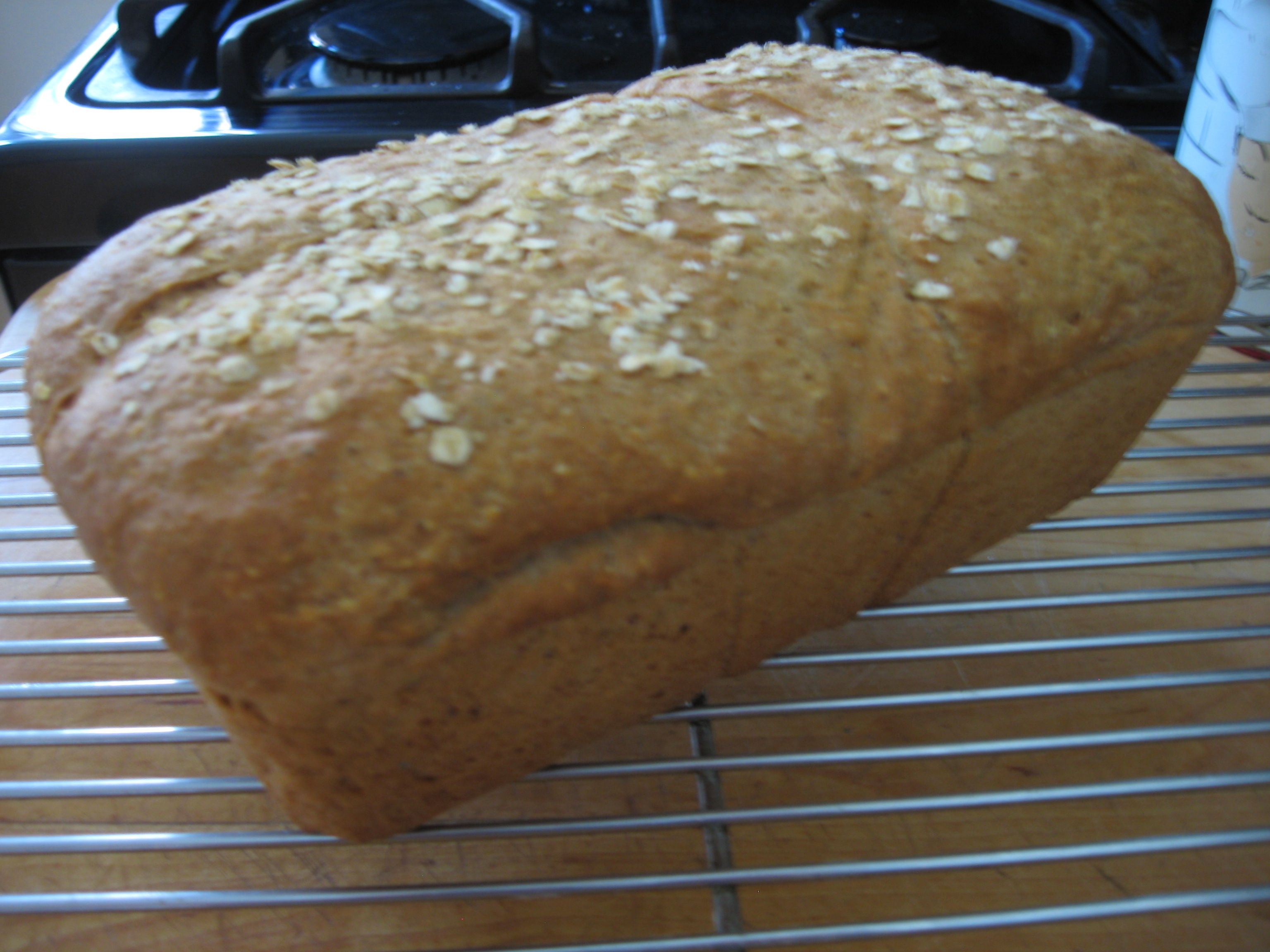