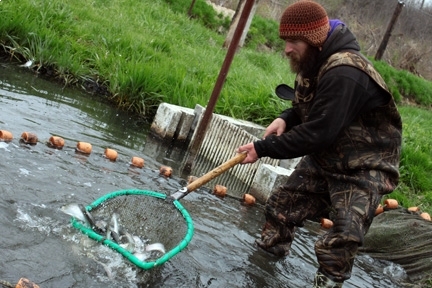 It’s cloudy and gray, what you might expect from an April morning. But it’s early May and this spring is running longer, colder and wetter than anyone had expected. You might say it’s perfect weather for the fish that fill the ponds at Rushing Waters Fisheries in Palmyra. 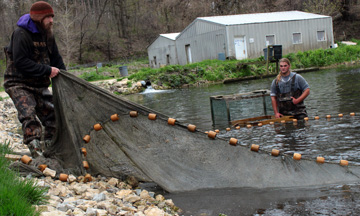 Drew Helwig, the farm’s foreman, is still wearing a couple of layers under his waders as he drags a 30-pound net back and forth through one of the farm’s 56 ponds, harvesting fish that are ready to be moved to another pond.

Rushing Waters is a year round operation. So, in the dead of winter, fish are being harvested by hand. Despite the cold water, Helwig and his co-worker, Luke Meddaugh, have ditched the gloves they had worn when the outside temperature was even lower.

Everything at Rushing Waters is done by hand, from hatching the eggs and rearing the fish for the 18 months or so it takes to get them to their one-pound market weight, to weeding around the ponds and processing the fish.

“We want to grow the most beautiful, best-taken-care-of fish possible, because it’s worth the most money,” Helwig said as he hoisted a net filled with fish to Meddaugh.

The 80-acre fish farm, located in Palmyra, in Jefferson County, is about an hour’s drive from Milwaukee. As it turns out, the farm is ideally located, surrounded on three sides by Wisconsin’s Kettle Moraine State Forest, where the great glacier “dumped all of its load: rocks and boulders and sand,” as fisheries manager Peter Fritsch says.

Aside from the area’s geological significance, it provides Rushing Waters with an abundance of natural spring water, creating ideal conditions for fish farming.

“We don’t have the agriculture and the farming that you do in other areas. We don’t have to worry about runoff,” Fritsch said. “The watershed is absolutely pristine.

The site for this farm, it’s perfect. It could hardly be much better.” 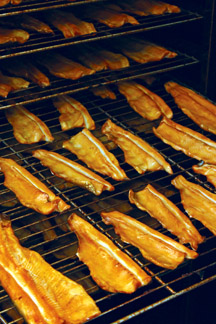 The farm is the largest of its kind in Wisconsin and harvests an estimated 250,000 pounds of rainbow trout every year. The company sells fish to stores and restaurants around the country.

The land started out as a fur farm back in the 1940s. The farm’s owner, Steve Johnston, raised fish as a hobby according to Fritsch. He sold furs at a market at Navy Pier in Chicago and would bring the fish with him to sell. Everyone liked the fish, including the chefs who shopped at the market. The fish are still popular there today and Chicago remains one of Rushing Waters’ biggest markets.

The conditions at Rushing Waters are not only well-suited to farm raising fish, the cold waters of the farms ponds have proven ideal for raising one fish in particular: rainbow trout, which Rushing Waters sells fresh and smoked.

Through the years, the farm has tried raising other fish, besides rainbow trout. Brook trout might be prettier, but they’re slimier and don’t produce as well. Artic char isn’t as popular as rainbow trout, Fritsch said. And the water in the ponds is too cold for fish like perch and walleye. Someone even tried to raise tilapia, one of the most common farm-raised fish, but didn’t succeed because the fish need warm water. 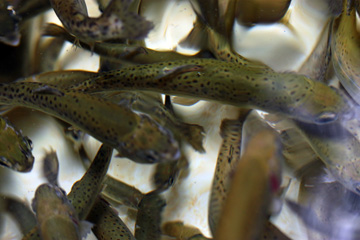 There are misconceptions about farm-raised fish, Fritsch said.

“There is good farm-raised and bad farm-raised. More and more, farms are greening up and doing the right thing,” Fritsch said.

Rather than focus on quantity and compete with other farms, Fritsch said Rushing Waters has instead decided to focus on good animal husbandry, which in turn results in a better product.

“One thing about our farm and Rushing Waters’ difference is that we give our fish almost twice as much space as the average farm,” Fritsch said. “We’ve learned that by just focusing on the husbandry of the animal you don’t get the diseases and you don’t get the problems that you do when you just pack ‘em in.”

Looking for an easy recipe for your grill? Whole Grilled Trout, right here.