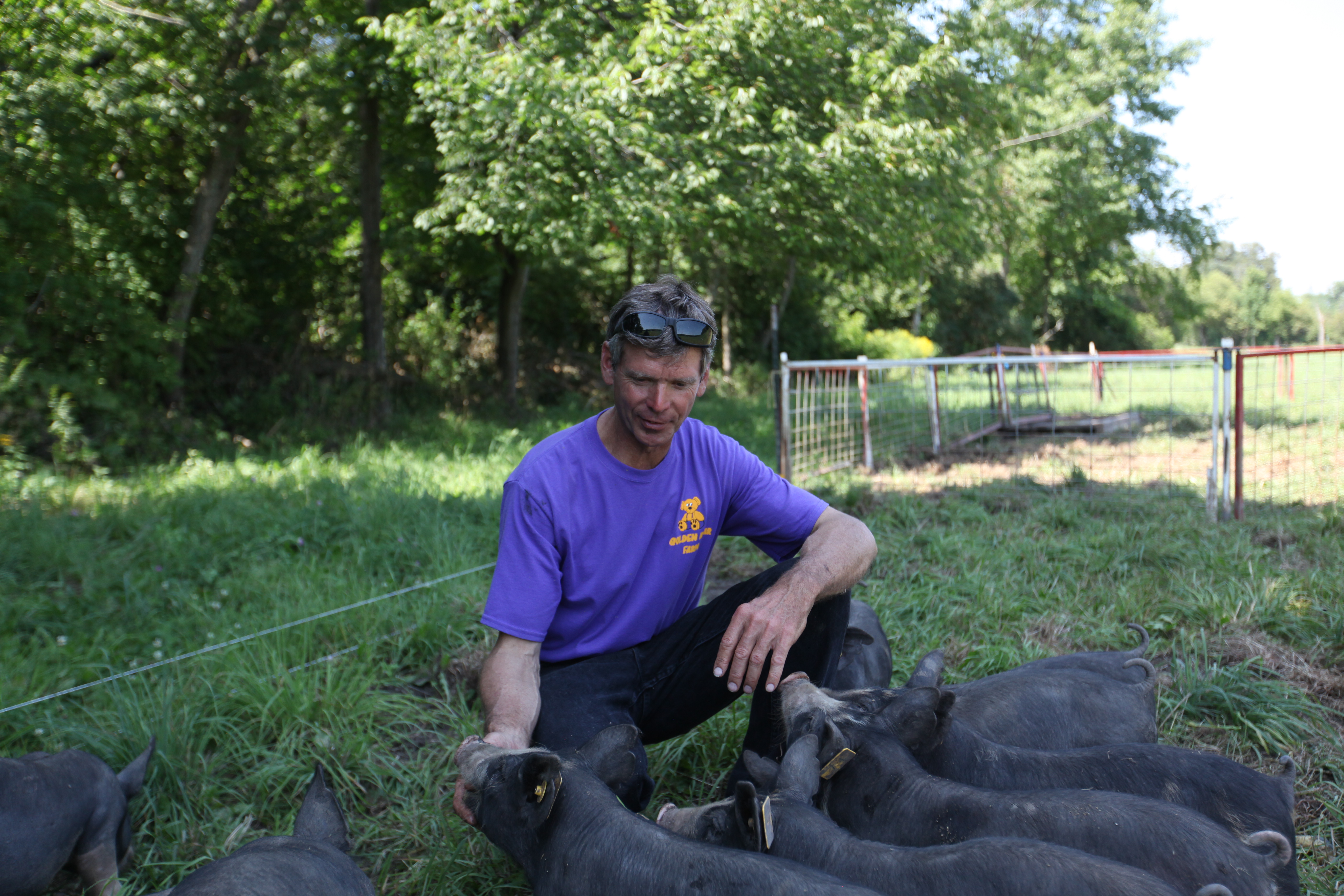 There’s no doubt in anyone’s mind that conventional farming and industrial agriculture isn’t good for the earth, the animals…or for us. That’s why we here at Outpost are serious about where our food comes from and when it comes to our meats there are strict guidelines that must be met before we even think about selling it to you. Often that means pairing up with farmers who are committed not to just making a buck but to farmers who take a vested, almost paternal, interest in the animals they raise. Steve and Marie Deibele from Golden Bear Farm in Kiel, Wisconsin are those kinds of farmers.

“We’re trying to do as much as we can from an environmental standpoint,” Steve tells me as we walk his 130-acre farm of rolling hills full of free-range pigs and cattle. “We’re really trying to work with nature.” As we make our half mile trek from his barn out to his pigs Steve points out new peach and apple trees he’s planted along with his vegetable garden. “Anywhere on the farm there should be something that’s very attractive to wildlife. Whether that’s turkeys, deer, coyotes, rabbits…whatever you would have naturally in this area.”

As we round a bend we get our first glimpse of the piglets resting in the shade of an old wooden flatbed. Almost immediately they come out to say “hi” with a series of grunts, barks and small nibbles at our pant legs. Assistant farm manager Maya Powalisz-Trochlell tells me she can tell the pigs’ mood just from the way they sound, “The more you understand what the pigs are talking about the more that you enjoy hearing something or not hearing something. The more you’re around the animals the more you see how they communicate, maybe in a different fashion than we do but they’re really smart. They have a pretty substantial degree of intelligence.”

Today Steve cares for about sixty pigs and makes it his mission to give them a good life while they’re on his farm. “We’re all about pasture-based,” Steve tells me as the pigs playfully jostle for a spray of hose-water. “There’s a whole variety of different grasses, clovers, alfalfa that we intentionally planted for them.” Steve’s commitment to pasture-raised Berkshire pork is the real deal. He even told me he’s taste-tested his own field’s offerings, “I’ve worked at systematically tasting the grasses, clovers, alfalfa actually to the point where I’ve consumed a fair amount of calories just trying to figure out why did they like this plant? Why this time? And why did they like that plant the last time? I can’t think like a cow or a pig but I can say there are dramatic differences in the taste and texture of the plant depending on the season and what the weather has been like.”

So how does a farmer who puts so much time and thought into raising his animals deal with the inevitable outcome that he’s raising these animals for food? “It’s very hard when they leave,” Steve tells me and Maya interjects “We try to live by ‘One Bad Day’ here.” Simply put: Steve and Golden Bear Farm makes sure their animals have the best life possible until that “one bad day” when they leave the farm to be processed. It’s something that affects them not just as farmers but as human beings. “What would they say about us if we just looked at the animals as money,” Maya asks. “It’s more pleasant for us as people by far to keep them happy,” Steve adds.

It’s a belief that’s in the company’s name itself. “The Golden Bear is the California grizzly bear and it’s been extinct since the early 1920’s, maybe earlier. By the twenties it was gone. The implication is what we do on this earth we really want to be careful with how we tread and what we do and how we treat the earth and everything on the earth.”