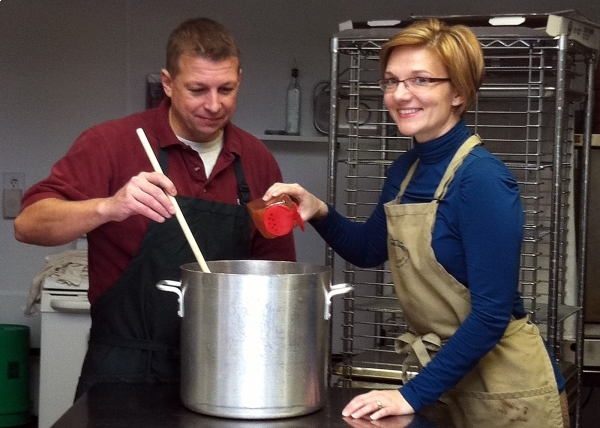 Tim and Allison Poff love hummus. You might say it’s what brought them together. They ate hummus on their second date at a restaurant in Minneapolis. Allison claims this was one way she knew Tim was the guy for her. Well, the hummus that night wasn’t very good and Allison claimed she could make something much better, after all, she’d been making it herself since she was in college. Tim tried traditional hummus while serving in the Middle East. Tim and Allison eventually got married and it seemed that a bowl of garbanzo beans was always on their kitchen counter, soaking overnight. They made a lot of hummus, creating their own unique concoctions that included items they grew in their garden in order to create new flavors. For years, they’d joke that their hummus was good enough to sell. Eventually, they did start selling it, to Allison’s co-workers. As sales increased, Tim and Allison decided to move their operation into a commercial kitchen in Waukesha. They started selling it at local farmers markets in the summer. Word spread and pretty soon they were selling out at almost every market. As they have increased the amount of hummus they produce, they’re careful to never cut corners. They want their hummus to always taste as good as if it were homemade. You’ll find several varieties of The Noisy Kettle hummus and dips at your favorite Outpost.