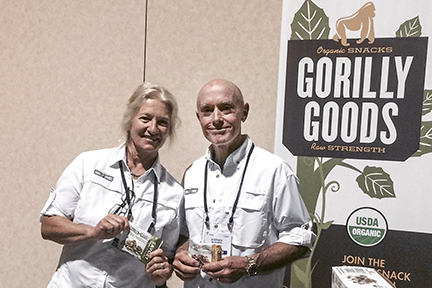 Gorilly Goods have had many names, beginning as “rawies” when they were a favorite snack for Steve and Chris McDiarmid’s friends and family. What to call them was always a question when Chris developed the recipe over 15 years ago.

“Well, they are really good,” Steve’s sister said. So, when Steve and Chris decided to go into business and share their creation with the world, they called it Reallygoods.

“Our first year up and running showed the “things” were loved by others as much as by us, and we made the decision to head further out of the Wisconsin market,” Chris said. They discovered the name Reallygoods was taken. So, Steve and Chris adopted a new mascot – Gorilly.

Now the “things” are called Gorilly Goods, and they’re made in Jackson, Wis. “A blueprint was drawn, a brand new facility was created, and we tripled our production and warehouse space, which has allowed us the room to introduce two new varieties of Gorilly Goods,” Chris said.

Looking for variety? Gorilly Goods now come in three flavors – Original, Chocolate and Savory. Like the original, the new Gorilly Goods are made with all organic ingredients, and they’re raw – dehydrated at less than 118 degrees so all the healthy enzymes remain active.

Snacks like this just don’t get any healthier! The next time you visit your favorite Outpost store, bring home some Gorilly Goods!