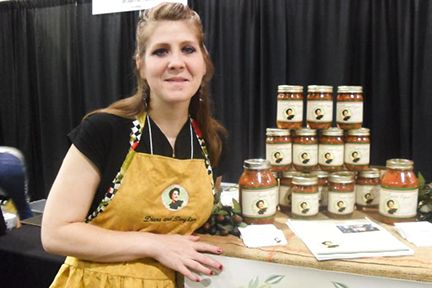 Diana Woodworth loves all varieties of cooking. She comes from the Upper Peninsula of Michigan where her family used to can food from their garden. When Diana moved to Wisconsin, her garden just got bigger and she continued canning food.

“Antipasto was a family tradition where we made it to clean up the garden at the end of the season,” Diana said.

People told Diana the antipasto was so good she should sell it. So, Diana began by making a recipe for antipasto handed down from her grandmother.

“Encouraged, I explored the possibilities, and with help from my daughters we started our business, Diana and Daughters,” she said.

Diana and her family make antipasto at the Farm Kitchen in Algoma, Wis. “Now, we support the local vegetable farmers for the ingredients we need for the antipasto,” Diana said. Diana and Daughters is a family business. The employees include Diana, her daughters Sarah and Rebecka, and Diana’s brother and family.

“We love making antipasto and are very passionate about our recipe that was handed down for safekeeping from the Giordana family,” Diana said. Try Diana and Daughters antipasto, available at your favorite Outpost.