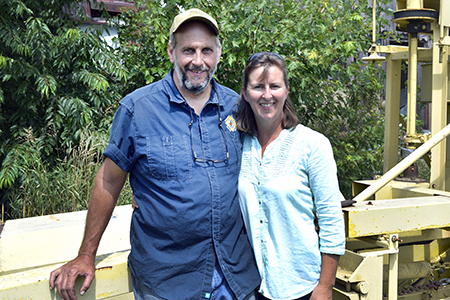 Tim grew up in Monona, WI living with his dad's family and extensive extended family. They have a long history of operating small, successful dairy farms in the Cross Plains area of Western Dane County. When Tim was 13, his dad operated one of his brother’s farms. He took Tim and his brother, as well as some neighborhood kids, along to work with him primarily to help pick stones out of the field. After that summer, many of those kids continued working there off and on for many years. Three went on to receive degrees from the UW Madison College of Agriculture. From that first summer on, Tim worked, learned, and saved in order to get his own farm.

In 1994 Tim purchased his first piece of land, and in 1997 purchased the farm on which we are now located. When he moved here, the farm was pretty run down. He bought it from the estate of a woman who was 103 years old, and as you can imagine, the farm was in need of serious cleaning, repairs, and upgrading after sitting idle for almost 30 years. It was not even possible to see the buildings because of the vines and box elders growing up their sides!

Upon moving here, Tim built a home for his family, followed by a shop and 4 hoop houses. He did most of the construction himself, with lots of pitching in and good advice from friends and family. He built the shop so he could buy used machinery in varying conditions and rebuild it.

Tim immediately started converting the farm to organic production, and the first field was certified in 1998. We believe in the organic model because of its holistic focus. Organic food is much more than having food free of synthetic chemicals. It is a complete system which, when followed, keeps our well water, and our neighbors’ and customers’ water clean. It keeps our soil and nutrients on the farm, not in rivers and streams. It allows for a more diverse habitat for wildlife. It requires no hazmat suits and no cross continent hauling of nutrients. It doesn’t allow the use of genetically modified seed, so what you are eating is naturally healthy. In short, the organic model allows us to produce natural, healthy food for our community without passing on the external costs of pollution, unhealthy foods, and a degraded environment to our neighbors.

Tim met Becky in 2011, and by the 2012 season Becky was involved in both the farm and CSA. They were married in 2013, and together continue to promote organic principles in all aspects of their lives.

Thanks for checking out our farm and CSA!