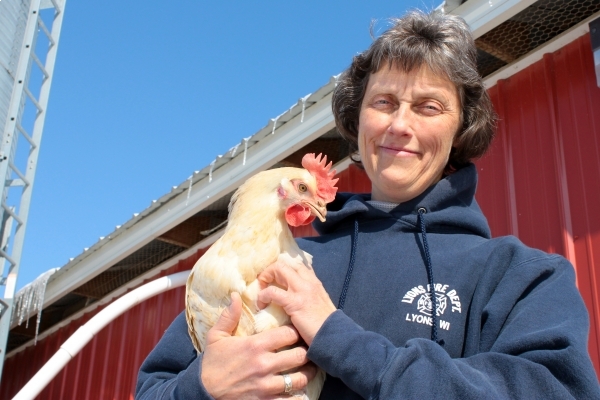 Lynn Lein has been without a driver for a while. That means, each week she has to climb into the truck and make deliveries. It’s not her favorite thing in the world to do, drive into the city, but it gives her a chance to bump into customers at Outpost.

Sometimes, if she sees someone with a carton of her Yuppie Hill eggs, she’s not afraid to stop them in the aisles.

“I’ll say, ‘Thanks for buying our eggs. Thanks for the support,” said Lein, who knows first hand the importance of the local food chain.

”It puts us farmers in connection with consumers. If it wasn’t for consumers, we wouldn’t be in business.”

Lein didn’t grow up farming. You wouldn’t know it by watching her run her seven-acre operation in rural Walworth County.

It’s safe to call Lein, 51, a suburban girl. She grew up around West Allis and Greendale. Her parents weren’t farmers either. However, when their daughter decided to start farming 12 years ago, they pitched in, working side-by-side with her. Lein left her job with Aurora Healthcare, to start Yuppie Hill Poultry.


It all started with a couple of hens. Her children, who are now grown, brought them home and the family built a fancy coop for hens. It was finished inside and had curtains, so it would look nice, Lein said.

“The farmers would drive by and say, ‘Look at those yuppies on that hill,’” Lein said. “It kind of just stuck with us. Nobody forgets.”

Two hens turned into a dozen. A dozen turned into 200 and so on. Lein has continued to grow as the demand for her brown eggs has grown. All the while, she’s taught herself, through trial and error, how to become a farmer.

She eventually built a café at her farm where they serve breakfast on weekends during the summer months. Lein maintains about 50 active accounts selling eggs to stores and restaurants in Madison, Milwaukee and Chicago. She’s also planning another expansion at her farm.

“If we didn’t have the demand, we wouldn’t put up the barn, but the demand will be there for a long time, for locally raised food,” Lein said. “People knowing where there food comes from is important.”