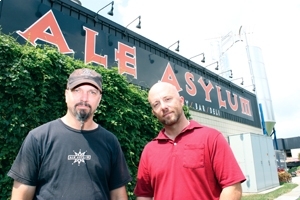 It started in college. Too proud to drink swill and too poor to drink decent beer, Dean Coffey decided to start brewing his own. It didn’t happen right away. In fact, Coffey, co-owner of Madison’s Ale Asylum, didn’t even realize people brewed their own beer at home. 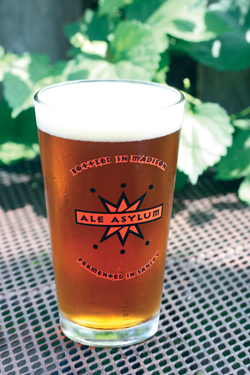 One night at a party while attending college in Boulder, Colo., Coffey tasted a bottle of beer that he really liked and inquired about it. He learned it was someone’s home brew. The next day, he went out and got his first home brewing kit.


Coffey developed his brewing skills before he eventually landed in Madison, where he spent a decade (1995-2005) as brewmaster at Angelic Brewing Co. That’s where he met Otto Dilba, who had worked his way through the University of Wisconsin-Madison tending bar. The two got to know each other and in 2006 they struck out on their own and opened Ale Asylum.


The self-described “beer geeks” have tried to differentiate themselves from other microbreweries by focusing on the four main ingredients that are used to brew beer — water, malt (barley), hops and yeast. They’re not throwing blueberries or spices into a beer just to come up with a different beer, Dilba said.


“Even with the four basic ingredients, there’s such a wide array of flavors. We’re style purists. We try to make individual beers excellent representations of the style,” Dilba said. The list of Ale Asylum’s available styles includes an IPA, a nut brown ale, a porter and a Scotch ale, among others.


While Coffey focuses on the brewing, Dilba is responsible for advertising and marketing. For Coffey, brewing is equal parts art and science. For Dilba, marketing is a little less complicated.


“The greatest marketing is word of mouth. For us, that’s all it’s been. We don’t do advertising,” Dilba said.


In the five years since it opened, Ale Asylum has amassed a menu of 15 beers. On the spectrum of microbreweries, Ale Asylum is small. The brewery turns out four year-round beers and six seasonal beers (they have two seasonal brews on the market at all times). Five beers are only available on tap at the brewery, Dilba said.


The beer was an immediate hit with consumers and the brewery’s success was a good story locally. Local liquor stores struggled to keep Ale Asylum’s beer stocked, Dilba said.


“We’ve been at or beyond capacity since we started in 2006. We’ve added two to three tanks every year,” Dilba said. The staff at Ale Asylum is now brewing beer twice a day, seven days a week. A brewery that started by filling 850 barrels a year will fill 10,500 this year.


Ale Asylum has done this while being located on the outskirts of Madison’s downtown district. Though it’s currently located in a unassuming business park north of downtown, Dilba and Coffey are looking to move to a more prominent Madison intersection would likely increase traffic and in turn bump up their business.


Currently, Ale Asylum’s beers are only available in the Madison and Milwaukee markets, but Dilba and Coffey see a day in the near future when they could grow and expand into other parts of the state. Once they get that down, they’ll consider expanding beyond Wisconsin’s borders. 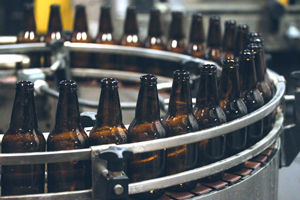 “Big for us is a function of increased distribution. I don’t think there are any artificial limits to how big we can get,” Dilba said. “It’s determining how big you want to get and how to keep up with production.