Did you get a chance to see the free documentary that was screened at the Avalon Theater on October 18th? To the Moon featured eighteen college students who came together to bicycle from California to Massachusetts to spread awareness about cooperatives, a business model they believe to be a solution to the volatile global economy. 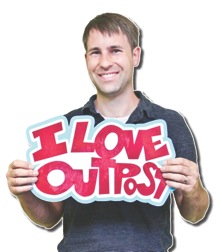 It was an Outpost sponsored event and those that attended mingled with Board members and munched on free popcorn (if they biked to the theater).

2. Democracy is Hard
At one point in the film, they spent over four hours planning for the next day and at the end of their session, decided not to make a decision. Later in the film, one of them spoke candidly to the camera and recognized that even though democracy is a powerful governing tool, it would be much easier if one of them made all the decisions.

3. People are People
Some of the activists had anticipated rural America to be indifferent to their self-proclaimed liberal cause and what they found really surprised them. The generosity and loving nature of those they met were more akin to family values than that of differences. Conversely, even though the activists had a lot in common their personalities sometimes clashed in negative ways. The stress of the trip and close quarters of their living conditions often served to magnify this.

4. Convenience Food is Convenient
The bikers had a support group to set up camp, wash dishes, and make meals. Even with that aid, it felt really easy to open up a bag of Cheez-Its at the end of a stressful and exhausting day. Putting thoughtful effort into our eating choices happens only after we have the means and effort to do so. Think about how true this is for those who have large amounts of stress or poverty in their lives.

5. Activism is Not Enough
Their trip across the country covered 4,000 miles, was a huge undertaking, and left them exhausted at the end of every day. When they could, they visited cooperatives of all types including grocery, farm, and banking. When the trip was done, one of the activists commented that the trip was a huge accomplishment but then asked the question “what do I do now?” Isn’t it interesting that a task such as riding a bike across the country can feel easier than deciding what to do next?

What do you think? Have you ever done something that inspired others? Would you support a cause such as this one? Let me know what you think.