A recent study released by the National Cooperative Grocer’s Association (NCGA) should make you feel pretty good about shopping at Outpost. 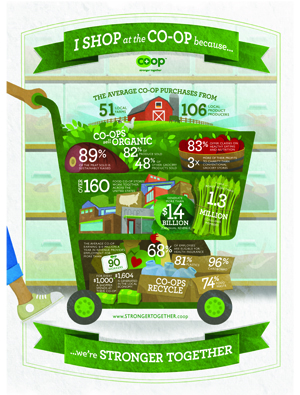 Well, because the report underscores the many ways that coops surpass the competition when it comes to creating economic and social impact on their communities.


Well, that’s true.  But, you might be surprised by some of the cold, hard statistics.

For example, did you know that for every $1,000 a shopper spends at their local food co-op, $1,604 in economic activity is generated in their local economy—$239 more than if they had spent that same $1,000 at a conventional grocer?

Even more dramatically, a  co-op with $10 million in annual sales generates $16 million of local economic impact.  A conventional grocery store of  the same size, in the same community, would have an annual economic impact of $13.6 million – meaning that simply by choosing to support and shop at  a food co-op, a community can increase its total economic activity by over $2.4 million a year.

And coops think about their environmental impact.

Best of all, they win with organics.

Which means, comparing Outpost to another retail chain is like comparing… conventionally grown apples to organic peaches.

So, next time you consider where to spend your cash, consider supporting your local cooperative. There’s simply no comparison.