When we think about the word 'diversity', we usually apply it to groups of people.  When a diverse group of people get together to create art, science, policies, products or laws, their outcome, is generally fresher and richer. Why? Because when we work with people who are not like us, we may think hard about our own ideas before offering them up to the team. Our ideas are tested under many lenses. The strong ideas/viewpoints/thoughts endure and the weaker do not.  Through diversity, we can think out of the box and produce resilient ideas or products.

We can extend this idea and move it from the world of humans to the world of plants - specifically crops. A plant or crop growing in one environment might exhibit different disease or pest resistance - or behavior in general - over the same plant (or a close wilder cousin) growing in another environment.  In fact, there are hundreds of similar-but-different plants scattered over the earth, each nuanced to thrive within its own environment. 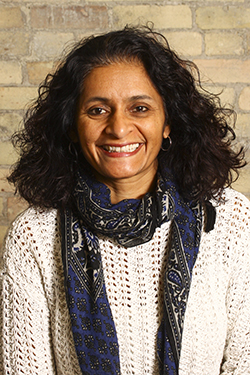 We have seen that dependence on a monoculture can be dangerous.  The Irish potato famine in the 1840s is one example of how the lack of diversity of one particular type of potato resulted in the destruction of the crop and the starvation of the people who were reliant on it.  Had the Irish planted many varieties of potatoes, this would not have happened.  Only some plants would have died, but the ones resistant to the blight would have lived.  On the other hand, potato diversity is celebrated in Peru.  Peruvian farmers have made it a point to preserve the genetic diversity of potatoes by growing many varieties alongside each other.

Unfortunately, biotech chemical companies have been working to control crops through patents and ownership of seed.  This control has led to the wiping out thousands of varieties of plants as industrial farming has moved in.  This has been detrimental to the environment and more importantly, it is detrimental to food security for humans.

In order to preserve biodiversity, the Svalbard Global Seed Vault was established in Norway in 2008.  The intent of the seed vault is to keep alive the possibility of many species of plants that exist or existed in the world.  In fact, there are plants that we currently may not value but we may learn that their genetic make up is needed in tomorrow's world.  We cannot splice away the genes with the thought that they are not important to us today.  Seeds offer us the possibility of tomorrow, and a variety of seeds makes that tomorrow so much stronger.

The film"Seed: The Untold Story" follows the work of some people who have taken steps to preserve plant biodiversity.  It explores the dependence on biotech chemical companies, it reviews various seed collectors, and it inspires us to begin thinking about how we can help to preserve biodiversity.

Outpost's Board of Directors will present  "Seed:  The Untold Story" at Fox-Bay Cinema on October 26th. at 6:30 pm.  This is a FREE event and everyone is welcome.  You do not need to be an Outpost owner.  The event will begin with a small presentation by Jennifer Casey, Executive Director at Fondy Food Center.  The film will follow, and after it, we will host a discussion about seeds and biodiversity - perhaps your comments will inspire the other attendees to action!  How are you preserving biodiversity in your world?  Join us!

Thinking of becoming a Board Member?  On October 26th application packets to run in the Outpost Board of Directors 2018 election will be made available. Consider running for the Board and contributing to your Co-op!